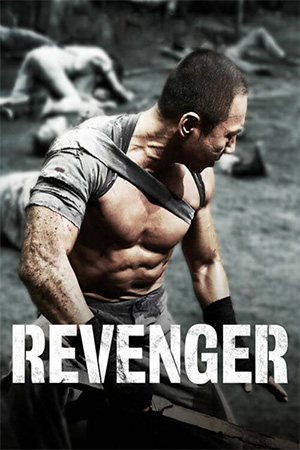 Sometime stuntman and all round kick ass fighter Bruce Khan gets himself a fight film all of his own in the brutally charged ‘Revenger’. On a remote island named AP-101, prisoners from various countries are sent to live (or rot) out the rest of their lives. Overseen by the ruthless villain Kuhn (Park) the island has split into different factions: those who live out their wildest violent impulses under Kahn’s diabolical rule and those who attempt to live a better and more redemptive life hidden away from Kuhn’s ruthless goons. Into the mix arrives Yul (Kahn), a man on a mission to find Kuhn and make him pay for a past crime. No sooner has he arrived on the island, Yul has engaged in combat with Kuhn’s minions, saved a mother and child from being slain, aligned himself with the “good” clan, and then set off across the island to find and kill Kuhn.

Basically a showcase for Kahn’s incredible fight skills, ‘Revenger’ is best when the all out martial arts mayhem is on screen. Fortunately there is plenty of it. The fight action on display here is superb: no flashy editing, no OTT camera trickery, just good old fashioned fighters going at it in a barrage of skilfully put together fight scenes. In fact, the flick is somewhat reminiscent of old school Hong Kong fight action, in that it puts talented fighters on screen, couples them with creative choreography and let’s them rip in a surfeit of pleasingly sustained fight scenes. Kahn knows his stuff and some of the fist and boot work he displays is incredible. Park is no slouch either and his epic one-on-one with Kahn is the kind of duel fight fans hope for. In fact, the final 20 or so minutes, much like a golden age Kong Kong actioner, is all out action awesomeness, which also includes some impressive and very brutal sword fight action.

The film has a very 1980s-anything-goes-vibe about it featuring such well worn staples as the kid who befriends and ultimately helps our protagonist, an abundance of cringe worthy comic relief (courtesy of the clan Yul aligns himself with) and mucho hammy acting. Unfortunately, this means proceedings falter in between all the ace action and while there are noble attempts to flesh out characters and proceedings; one can’t help but get impatient for the next bout of blistering martial arts. In fact, if it wasn’t for the super fight action, ‘Revenger’ would be two stars but succeeds due to the stellar fighting on show and its star’s considerable fight skill.