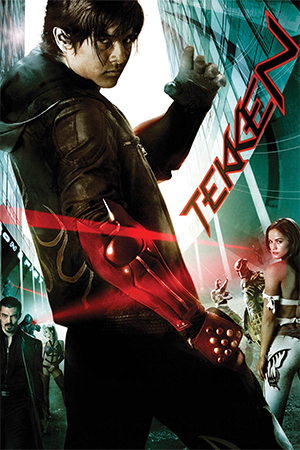 I’ve been a fan of the ‘Tekken’ videogame franchise since the early Playstation days, and have often thought that the varied characters and range of fighting techniques would lend themselves perfectly to an action movie. With the director of Brandon Lee’s ‘Rapid Fire’ behind the lens and a number of genuinely talented fighters aboard, this 2010 offering certainly showed plenty of promise. Sadly though, this is one battle that the audience clearly loses…

The year is 2039 and World Wars have destroyed much of civilization as we know it. The remaining territories are no longer run by governments, but by corporations, the mightiest of which is Tekken. In order to keep the masses down, Tekken sponsors the Iron Fist Tournament in which fighters compete to the death for ultimate glory and receive a lifetime of stardom and wealth. When Jin Kazama (Jon Foo) witnesses the death of his mother, Jun by Tekken in the slums known as Anvil, he decides to seek out vengeance by going after the corporation.

The ‘Tekken’ backstory is one that has become fairly convoluted over the years, mainly thanks to numerous different game incarnations that constantly build upon the existing mythology. As you would expect, this much material is impossible to cover in a single movie, so choosing to focus on the character of Jin seems like a decent place to start. Unfortunately though, that would appear to be about as far as the writers got as pretty much all of the history, interlocking relationships and sub-characters are completely ignored. Instead, the film plumps for an instantly forgettable underdog-come-good story that doesn’t bother with the majority of Jin’s developing characteristics and just proves to be a total waste of the license.

The acting on offer isn’t much cop either, making use of mainly B-movie actors and untested talent. Stuntman-turned-actor Jon Foo is given centre stage, with his most notable claim to fame being a bout against Tony Jaa in ‘Tom Yum Goong’. Though he is undoubtedly a very physically gifted performer, his acting is fairly raw and the constant barrage of cheesy dialogue he has to dish out doesn’t exactly do him any favours. The fact he is also saddled with Luke Goss is another major setback, as Goss’s performance is nothing short of horrific. His line delivery coupled with the cockney accent had me cringing constantly and I have no idea how he keeps getting movie work. In all honesty, the only two performers that really stand out are Gary Daniels and Cary-Hiroyuki Tagawa. Aside from having a decent pedigree, both men clearly researched their roles and not only do they nail their characters, but they also steal every single scene in which they appear.

However, all of the above could easily be forgiven by some moviegoers if ‘Tekken’ actually delivered some kick-ass action scenes. Sadly, it doesn’t. Though there are some truly gifted martial artists on display, director Dwight H. Little just doesn’t seem all that interested in shooting the action. Most of the time it appears as though he actually gets bored with it, choosing to spend more time looking at the crowd rather than the actual combatants. Jin’s fights are also a complete mess, simply because every single one of them follows a very transparent formula. They start out with him getting his ass kicked for two minutes before he has a flashback to his mother’s training and then stages a comeback. This makes for some truly tedious fight scenes and the fact that the film blatantly chooses to overlook the character’s special moves is just another nail in its coffin.

Whether you’re a fan of the videogame or not, it’s fair to say that ‘Tekken’ is a pretty weak all-round effort. Even a few moments of magic from Cary-Hiroyuki Tagawa and Gary Daniels do little to improve the overall picture, and it has to be said that this is a sorry excuse for a ‘Tekken’ movie and an even sorrier excuse for an action movie.