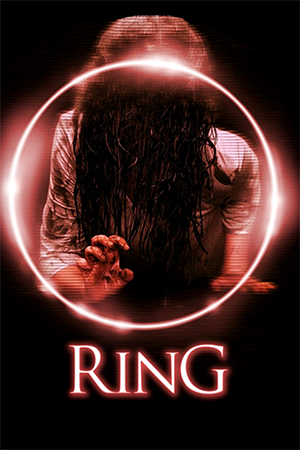 In recent times, most Western horror movies seem to have become preoccupied with bloodshed and body counts. What people seem to have forgotten though, is that if you make the audience afraid of the basic premise then you don’t need to spend so much time slaughtering every soul in sight.  ‘Ring’ is one of the many Japanese horror films that really seems to get inside your head, and it all comes down to a simple story that is expertly told.

There is a rumour that if you stay up late watching television, a ghostly figure will appear on the screen and then you only have a week left to live.  When a schoolgirl dies under eerily similar circumstances, reporter Reiko Asakawa (Matsushima) sets out to see if the rumours are true. After getting her hands on a copy of the video, she too falls under its curse and is told she has a week to live. With the help of her ex-husband, Professor Ryuki Takayama (Sanada), Asakawa must now try to trace the origins of the video if she is to have any hope of stopping her imminent death.

Based on a novel by Koji Suzuki, ‘Ring’ is a brilliantly executed psychological horror film that utilises tension and anticipation to create the desired chills. There are no chainsaw wielding maniacs to be found here, and the film is more of a mystery that will have your heart racing as our heroine battles to beat the curse. Hideo Nakata also makes the film feel genuinely scary thanks to some disturbing visuals and an unsettling atmosphere. This is particularly applicable to the scenes found in the mysterious video, which are so haunting that they’ll stick with you for days.

The characters found within ‘Ring’ are also surprisingly logical when it comes to dealing with their problems. Asakawa is clearly a very driven woman who is pushed onward by her sense of journalistic intrigue. She learns from her experience throughout and it’s really interesting to see how her state of mind shifts as she realises the seriousness of her predicament. Takayama also makes for a welcome inclusion as he helps to flesh out Asakawa’s back story as well as providing her with a handy confidant and mystery solving partner.

Japan often seems to be one step ahead of the game when it comes to horror, and it’s good to see that ‘Ring’ continues that tradition. The film showcases psychological horror at its absolute finest and it manages to keep you on the edge of your seat throughout.