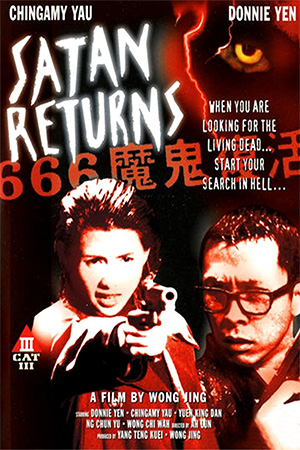 Mid 90s horror action schlock from (who else?) Wong Jing, ‘Satan Returns’ can’t decide if it’s a serious dark thriller or a goofy over-the-top action horror combo. It’s a bit of both really, well perhaps more goofy than serious and while it has a cool visual look and a pre-mega star Donnie Yen, Wong Jing’s wannabe supernatural ‘Seven’ (it really isn’t that at all!) is just a big pile of meh.

The concept is pretty cool: a homicidal killer called Judas (Ng) is on the rampage looking for the daughter of Satan and killing lots of innocent women (by ripping out their hearts!) in the process. This leads him to police complaints officer Shou-Ching (Yau) who he believes is said daughter of darkness. A lovely looking but overly serious lady, Shou-Ching is having dreams that appear to be confirming she is in fact Satan’s kid. Thus, she teams up with bespectacled super-cop Mo Ti Nam (Yen) to find out just what in the hell is going on, and while there is smidgen of gunplay and kung-fu, proceedings instead become lethargic and focus all too much on bad jokes (of the sex and breast variety!) and the “comedy” mugging of fellow cop Ka Ming (Chi Wah Wong).

Things begin in style and supernatural cool with hearts being ripped out, chases down rain soaked alleyways, ‘Evil Dead’ style POV camerawork, a decent shoot-out in a restaurant and if proceedings had continued this way (and solely focused on Chingmy Yau’s dream troubled heroine and Donnie Yen’s cool cop) then ‘Satan Returns’ could have been a fun trashy horror action flick. Instead there is too much naff comedy mugging from Chi Wah Wong (seriously, what is his character even doing in this flick?) a pace that drags (one minute overly serious, the next minute daft as a brush) and shocks, gore and action that are all really rather tame (even by mid 90s standards!). This unfortunately means events are never really as exciting or shocking as they should be.

One time ‘Naked Killer’, Chingmy Yau does her serious best and Yen is actually pretty cool as the geeky looking cop (with bang on trend black rimmed glasses!) but Francis Ng’s Satan loving bad guy never really feels as threatening as he should, despite ripping the hearts out of lovely young ladies (maybe this reviewer has just seen too many hearts ripped out to care anymore!). When the bad jokes and mugging are put aside, there is some creativity on show including a fun showdown involving possessed cops, a severed leg, a chainsaw and a nail gun! Still, ‘Satan Returns’ should have been a lot more fun with more and better action scenes, and for once should have focused on the serious side of things and left the comedy mugging out. Meh!