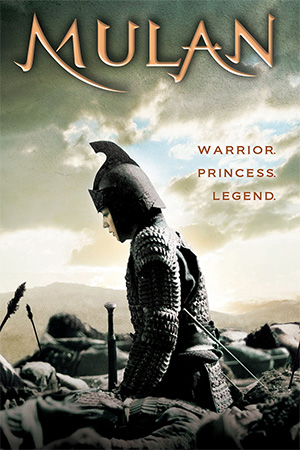 Chinese cinema regains control of the legendary heroine Mulan after its controversial Disneyfication and gives mainland superstar Vicki Zhao the role of a lifetime. With so little actual source material  – the 6th century poem about the woman who led an all-male army and subsequently a few written works inspired by it – there is plenty of scope for director and writer to put their own style into the proceedings.

This historical (or should that be mythological) epic is set during a time when the country was fractured and tribal conflicts rife. When the fearsome Rouran tribe are about to sweep into the land of Northern Wei and intend to become permanent rulers thereafter, all able bodied men are drafted into service to protect. The sickly father of peasant girl Hua Mulan is one of the male residents to be enlisted, but the caring daughter takes his place and joins a poorly  organised army. There are stringent rules about women having no place on the battlefield – a rule even stipulates that any soldier bringing one into the camp will be executed – and so Mulan disguises herself as a man to evade discovery.

By the time Mulan’s gender has finally been discovered she has already impressed in battle and especially with her ability to lead troops. Eventually becoming a general, she formulates an ingenious plan to beat the overwhelming odds her regiment faces against the Rouran invaders. The horrors of war begin to wear the warrior woman down though and when those close to her are sacrificed on the battlefield, she faces some difficult decisions.

John Woo’s extraordinary ’Red Cliff’ production has raised expectations for any traditional epic considerably and anything released since desperately needs a mark of quality to stand out. ’Mulan’ does not provide that elevation of standards. Indeed, Jingle Ma’s own vision of the Chinese legend, while competent, never threatens the upper echelons of the genre. It never quite capitalises on a spirited beginning, eventually becoming more of a leaden-footed drama than a blood and thunder action flick.

Criticism is usually levelled at the heroine when any film adopts the ‘woman disguised as a man’ plot-line: cries of ‘she still looks like a woman!’ have been adopted even though Jingle Ma does a fairly effective job of hiding her femininity early on. Anyone who’s seen the androgynous heroes of any recent K-drama should be much more forgiving; watch the ludicrously coiffured heart-throbs of something like ’Boys Over Flowers’ and Vicki Zhao’s downtrodden look for Hua Mulan will seem like ’Mr.T’ in comparison. No, the problem is something far greater than just how Mulan looks – it is how her character is ultimately crafted that leaves a vacuum in the film. There is never much explanation as to how she goes from peasant girl to battle-hardened warrior, despite a few pale attempts to show her eventual motivation in a couple of wasted scenes. This failing means that Mulan is initially sympathetic, yet soon merges into the usual collection of solemn warriors – and when an uninteresting  romantic sub-plot takes over the focus of Jingle Ma, the production begins to grind to a halt.

‘Mulan’ is an adequate epic that is lost among some truly great contemporaries. It doesn’t engage emotionally to the extent ‘Battle Of Wits’ did and it’s battle scenes are hardly ‘Red Cliff’ calibre. There’s a preponderance of these middle-of-the-road historical epics on the market at the moment and Jingle Ma’s flat take on Hua Mulan just adds another to their number.