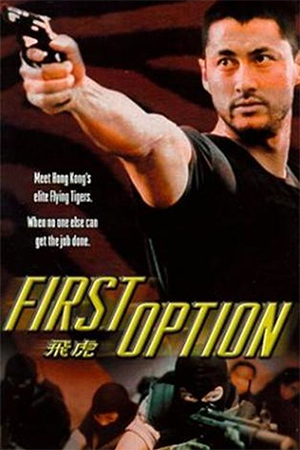 When the customs department uncover a plot to bring a large shipment of Heroin into Hong Kong, they attempt a raid that goes horribly wrong.  The SDU team, led by Mike (Wong), are called in to assist and the customs department appoint Minnie (Leung) as their representative.  Mike and Minnie (hopefully not an intentional Mickey and Minnie joke) soon find themselves at each others throats and their failure to communicate ends up ruining all of their operations.  As a lack of results begins to put pressure on Mike’s job, the two finally realise that their only option is to work together so that they can bring the criminals to justice.

Despite its title, ‘First Option’ is in fact the second outing in the ‘Option’ series and is intended as a prequel to the original film, ‘Final Option’.  Michael Wong returns to the role of Mike and even though he retains the annoying habit of switching between English and Cantonese, actually makes for a passable action hero.  His on-screen chemistry with Leung is also surprisingly solid, and the pair play out their evolving relationship quite effectively. Unfortunately though, the script is far less appealing and the cringe-worthy dialogue is often a struggle to sit through. Thankfully, the film counteracts this by placing a big emphasis on the action and it is here that it starts to shine. Bruce Law dishes up some exciting SWAT style operations that see the SDU storming buildings or fighting their way out of the jungle. It’s a refreshing change of pace and it really seems to give the action a renewed sense of realism.  My only minor complaint is that everyone is often wearing the same outfits so it does occasionally become a struggle to tell one character from another.

‘First Option’ is definitely a high scorer on the cheese scale, but luckily it’s also loaded with some original action scenes that make it worth your while. If you’re sick of seeing dual-pistoled backflips and are craving something a little more grounded, then you’ll probably appreciate what this has to offer.