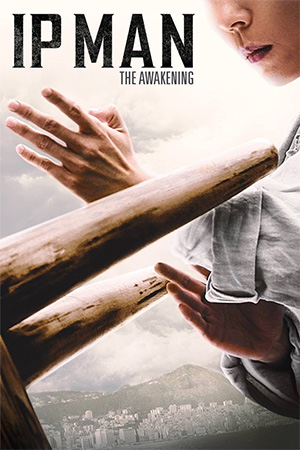 Having lived through the great Wong Fei-Hung period of the early to mid-90s in Hong Kong cinema, even I am surprised at the longevity that Ip Man seems to have shown. The sub-genre started in 2008 with Donnie Yen’s ‘Ip Man’ and nearly fifteen years later, there is still a trickle of films based on the historical figure. Not, of course, that the storylines that include Ip Man tend to have much to do with real history, but that’s a different debate.

A youthful Ip Man visits Hong Kong and is immediately plunged into action when he stops a kidnapping attempt. Little does Ip know that his rescue starts a chain of events causing the local gangsters to go to war against the foreign white slavers. Soon his new friends are targeted by both sides with the Western foes becoming especially keen to test the skills of Ip Man. To facilitate this, the girl who Ip saved on entry to Hong Kong – and who has since become infatuated with him – is taken hostage, setting up a final showdown.

I started watching ‘Ip Man: The Awakening’ and struggled to place the lead actor – he looked familiar and I couldn’t work out why. Then I looked him up – it is none other than Tse Miu, an actor who rose to fame as a child star in the mid-90s with such hits as ‘New Legend of Shaolin’ and ‘My Father is a Hero’. That realisation aged me almost instantly. It was great to see the undoubtedly talented Tse Miu back, though you can’t help but think that this was probably a bit too late in his career to play a plucky young version of Ip Man. And the film tries to emphasise the fact that the eponymous hero is a slightly reckless youth despite Tse Miu drifting towards forty in real life.

Though Tse Miu should have been playing a later incarnation of Ip Man, he is still the best thing about ‘Ip Man: The Awakening’. The production is a mid-budget effort, a few notches below the Donnie Yen Ip Man films, but still attractively filmed; it’s undoubtedly better than the glut of cheap quickies that seem to have been appearing recently. This enables it to keep the viewer’s attention even when the plot becomes so very familiar, a fact that becomes apparent within just a few minutes.

While the storyline and background characters fail to engage, ‘Ip Man: The Awakening’ redeems itself with the action. It starts underwhelming, favouring the quick-cut editing style that blights modern action cinema. Yet, with each new fight scene, the quality appears to move up a notch; while not exactly the stuff of its more illustrious contemporaries that feature Mr Yen, they more than hold their own against most of the efforts today. ‘Ip Man: The Awakening’ may not be remembered in the great canon of Chinese folk hero cinema, but as a solid offering that clocks in under ninety minutes, this is recommended.