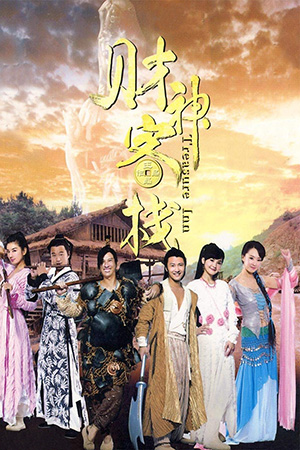 Young Master (Tse) and Brad (Cheung) are two talented, yet massively underappreciated members of ancient China’s police force. While others are assigned juicy cases and enjoy pop idol status, the pair are stuck with laundry duties and can only dream of attaining the golden badge that the best constables boast. When a local family is killed in bizarre circumstances the nation’s crime fighting heartthrob Captain Iron (Ho) is called to the scene to solve the case, prompting Young Master and Brad to start their own investigations in the background.

After being the twin toast of Hong Kong dramatic cinema after excellent performances in both ‘The Beast Stalker’ and ‘The Stool Pigeon’, Nicholas Tse and Nick Cheung transform into the Dean Martin and Jerry Lewis of Asian cinema for ‘Treasure Inn’; Tse is a handsome, suave, kung fu fighting version of the former while Cheung mugs through comedy buck-teeth to recall the latter. And yet this isn’t anywhere near the kind of disturbing experience it could be. Indeed, there are a few moments during the duration that ‘Treasure Inn’ threatens to be rather good fun.

Wong Jing has always known his audience well. Very often that line would be damning with feint praise, but ‘Treasure Inn’ is a rare modern success from the writer/director who so often aspires to scrape the bottom of the barrel. Backed by good production values, smartly choreographed, roof-bouncing fight action and a cast who really seem to be getting into the spirit, this absurd wuxia comedy recalls the better examples of that barely breathing sub-genre like ‘Eagle Shooting Heroes’ and ‘Flying Dagger’.

‘Treasure Inn’ still manages to get stuck in tirelessly unfunny sequences when the action switches to the eponymous inn. That, of course, is the nature of the beast as wuxia comedies can be a very tough slog even for the most forgiving of viewers. Thankfully Wong Jing boosts the flagging pace in the last third and finishes proceedings with a good wedge of action and a happy ending. It has a fairly optimistic aim of being a comedy ‘Detective Dee’ and while it might not quite achieve a happy union between its components this is an undemanding distraction.

*Mullet alert – Nicholas Tse sports possibly the most outrageous mullet seen in recent years. His long flowing hair with a spiked peak recalls the very worst excesses of the 1980s Eurorock and is sure to offend those of us with rather dull partings.