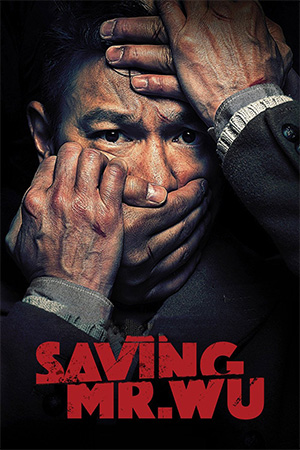 In 2004 Chinese actor Wu Ruofu was kidnapped outside a Beijing nightclub by a gang who assumed he must be wealthy as he drove a BMW. Not knowing who their victim was until later, the gang demanded a ransom on $250,000, but were eventually apprehended by the police and given death sentences. For years after there was discussion about making this unpleasant experience into a film, yet it has taken over a decade for the story to reach the big screen. However, the most surprising thing about Ding Sheng’s ‘Saving Mr. Wu’ is that, remarkably, it stars Wu Ruofu himself albeit not in the main role.

When Wu (Lau) is kidnapped, the police launch a major operation to rescue him before the encroaching deadline. The ruthless kidnappers are quite blunt with Wu and tell him that he will be killed unless they receive their money, showing him their intent by threatening to kill their last hostage who remains with them. Wu courageously steps in to save the man’s life and promises to pay the ransom for both parties as long as they are unharmed. Knowing that they have a bona fide star to extort money from, the gang raise the stakes and Wu must race against time to find the millions of dollars that they think an actor like him must be earning. Meanwhile the police start to piece together the incident and eventually one of the kidnapper’s indiscretion means he is caught. But knowing he faces the death penalty and with time running out to find Wu alive, the captured gang member proves to be a far from easy suspect to deal with.

‘Saving Mr. Wu’ is a gritty drama that concentrates on realistic action rather than orchestrated thrills. With a focus on the ugly intricacies of the plot and desperate motivations of the kidnappers, Ding Sheng strips the film back to a simple police procedural mixed in with the awkward interaction of the criminals and victims. Andy Lau excels as the eponymous Mr. Wu though the audience is never quite sure how much the character is based on Lau himself and how much is fictional; there are references to his performance in ‘God of Gamblers’.

If one thing harms the overall effect of the film it is the general grubbiness of the look. Apart from Mr. Wu – and even he takes a while to warm to – none of the other characters, whether law enforcers or criminals, are people we can even remotely warm to. That is the clear intention of Ding Sheng though it does come at the cost of alienating the viewer at times. Despite eschewing all the trappings of a big budget thriller, ‘Saving Mr. Wu’ is still a tense and perhaps even thought-provoking production.