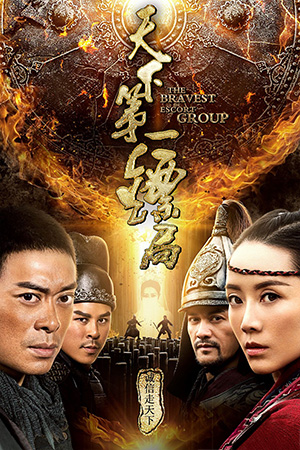 Yang Liu An leads a famed team of bodyguards who are tasked with transporting the fabled daughter of General Ma across the country to safety. The journey is fraught with danger as the enemies multiply; there is general Hala, his second-in-command Ma Biao and the enigmatic Zhu You who has his own agenda, all lining the varied route through the Chinese countryside.

‘The Bravest Escort Group’ was one of those films you start watching while all the while thinking that it must have either been edited down from a much longer version or part of a series. Within the first twenty minutes, so many characters appear that the whole thing becomes quite a dizzying spectacle. Notice I say ‘appear’ rather than ‘are introduced’ as said characters just pop up in the story as if the viewer is intimately familiar with them. And then, if this isn’t confusing enough, other sub-plots are referred to by the people in the film and we as the hapless viewer are given no information beyond the allusion.

I’ve read a few reviews that have referred to this as a film of two distinct halves and I cannot really explain it any better than this. The first fifty minutes are a confusing mish-mash of incidents and action scenes with very little context, all dusted with some typically broad humour. By the time the second half is under way, many of the background characters have been culled and the whole thing becomes a lot more serious, culminating in a typical blood-and-glory swordplay finale. The lighter part of the film does have its strengths – there is much more interplay between the players involved which proves quite enjoyable (albeit bewildering at times) while the conclusion is where action fans will get their hit.

‘The Bravest Escort Group’ makes superb use of China’s naturally stunning scenery, something the old school kung-fu films of the past could never hope to utilise. This adds an extra dimension to the production and shows how nothing quite beats good location work. As a film though, it’s a strangely disconnected affair, watchable but like a shoddy cut-and-shut operation run by inept gangsters. Odd.