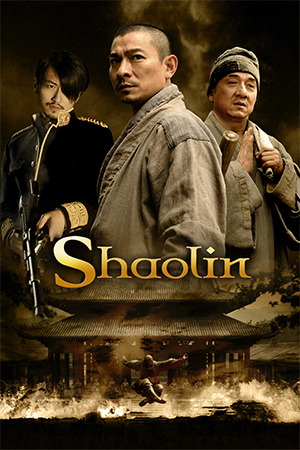 A year after teaser trailers of Benny Chan’s epic began to emerge on the web, ‘Shaolin’ is on the big screen and ready to do battle during the lucrative Chinese New Year period. With such anticipation created by the talent in front of the lens and the likes of Yuen Kwai on choreographing duties, this had quite a lot to live up to. Yet Benny Chan’s last ‘eagerly-awaited’ blockbuster ‘City Under Siege’ may have doused the frenzied expectations, such was the uninspiring mess it turned out to be.

During the period of internal strife throughout China at the end of the 19th century, General Hou Jie (Lau) ruthlessly crushes any rivals as his forces consume the land around. An early confrontation with the peaceful Shaolin monks reveals Hou’s complete lack of compassion as he executes a surrendering enemy right in front of them. In the background, his subordinate Cao (Tse) observes with quiet menace.

Cao’s secret machinations come to fruition when Hou is tricked into ambushing his superior and can only watch as his own forces turn on him. Escaping on a horse-drawn carriage, is found by Shaolin monks on a hillside though they are too late to save his daughter. Hou recovers within the confines of the temple, eaten away by a mixture of vengeance and guilt, while Cao consolidates his power with the help of British firepower unaware that his former friend is still alive.

The story of the Shaolin, its inhabitants and its numerous enemies has been one of the great sources for kung-fu cinema. From ‘The 36th Chamber Of Shaolin’ to the People Republic Of China’s first foray into the genre (Jet Li’s acclaimed debut ‘Shaolin Temple’), the Buddhist temple said to have been the birth place of most martial arts has passed into the realms of mythology. Benny Chan’s new adaptation of this legend is, thankfully, a worthy addition to the Shaolin canon. Sprinkled with CGI yet still keen to utilise the great physical talents of China’s performers, this is a successful fusion of 21st century trickery and old fashioned brio.

‘Shaolin’ uses a familiar conceit, recalling ‘Eight-Diagram Pole Fighter’, where the war-like secular world comes crashing into the quiet introspection of the temple. Andy Lau follows ‘Detective Dee & The Mystery Of The Phantom Flame’ with a fine performance as the villain turned hero, managing to make his eventual contrition convincing while proving remarkably adept at some of the intense fight scenes. It’s a surprisingly complex character that Lau is given by the writers and his skills are more than capable of handling the nuances. Fan Bing Bing and Jacky Wu are somewhat underused though a winning cameo by one Mr. Chan adds to the films strengths.

Benny Chan has delivered one of the best efforts of this new kung-fu boom. The dramatic framework is sturdy enough to make ‘Shaolin’ emotionally engaging, while the Yuen Kwai-orchestrated action is a delightful throwback to the Golden Age. While not every strand is a complete triumph – the cardboard cut-out, cackling British villain seems to be a legal requirement for all Chinese productions at the moment – ‘Shaolin’ is still rip-roaring entertainment and deserves as much support as fans can give it.