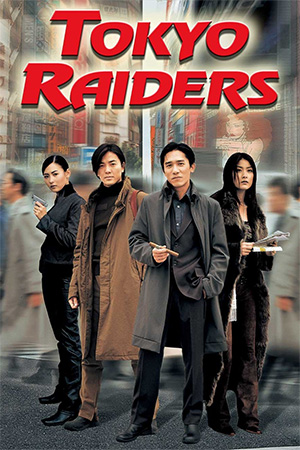 On her wedding day to a Japanese businessman named Takahashi, Macy (Chen) discovers that her groom to be has disappeared. At first glance it seems like a case of cold feet, but when Macy flies back to Hong Kong to her flat, she realises that the situation is more serious than it first appeared. A mysterious young interior decorator, Tommy, is also looking for Takahashi as he is owed money for the work he has done on the couple’s flat. When Macy decides to travel to Tokyo to find Takahashi, Tommy invites himself along in an attempt to recoup some of what he was promised. On arriving in Tokyo the two are almost immediately ambushed by a group of thugs who are also interested in Takahashi’s whereabouts for their own unknown purposes. Alongside them is Lenny, a private eye who allies himself with Macy and Tommy; but can either of Macy’s new-found colleagues be trusted?

After relative success with ‘Hot War’ and ‘Fly Me To Polaris’, director Jingle Ma apparently found himself with a decent sized budget at his disposal. The good news is that for the most part, Ma shows every cent of it on the screen. The bad news is that Ma once again lets the plot get a little too convoluted near the end with the numerous twists and turns. However, it should be noted that ‘Tokyo Raiders’ is a very enjoyable viewing experience and so the latter is not as important as the former. For the first time in quite a few years, it can really be said that a Hong Kong film is plain’fun’; this is not meant as a dig at the other films around at the moment, nor is it an attempt to belittle ‘Tokyo Raiders’ though.

The three main leads deserve due credit for the fact that their performances all add a little something to the overall feel of the film. Tony Leung is wacky, but very charismatic and Ekin Cheng gives one of his most magnetic performances in recent years – reminiscent of some of Yuen Biao’s 80’s roles. Much has been said of Kelly Chen’s performance; many have been unduly harsh of her work in this film, but she does combine the necessary glamour with a pleasant earnestness that gives her character some life.

‘Tokyo Raiders’ therefore is a top-notch piece of entertainment that, with a little more care in certain departments, could have been even better.