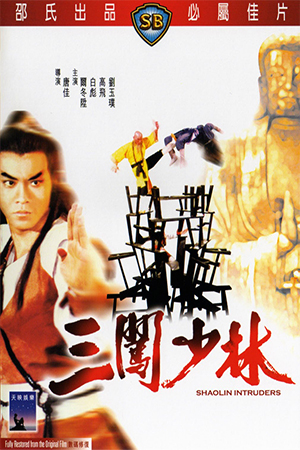 A series of ruthless robberies throw the once peaceful martial world into confusion as the mysterious thieves leave little trace of their actions. Finding themselves accused of the crimes are three differing fighters who share a strong friendship: Li Chin (Derek Yee) is a suave, but sometimes aloof expert; Chow Yi Tung (Pai Piao) is his happy-go-lucky best friend who loves to gamble and fight local bullies; Yeh Shing Wa (Lau Yuk Pok) is the daughter of a famous bandit tribe who has an obvious crush on Li Chin. The local authorities suspect Yeh Shing Wa of the crimes due to her reputation as a formidable kung-fu expert, but her loyal friends leap to her defence and set out to reveal the real robbers. After arriving at the scene of the latest appearance of the villains, Yeh identifies the fleeing band as monks and also notices their use of the ‘Shaolin Palm’. The evidence clearly pointing to Shaolin, the justice-seeking trio travel to the famed temple and ask for answers to their questions. To this end, the head monks agree to let the heroes prove their incredulous accusation, but they must first pass three tests to be given the chance. With the odds stacked against them as they face the formidable monks, they use all of their wiles to achieve their goal and finally discover the truth behind the crimes.

Made near the end of the great Shaw Brother’s period of the late 60s to early 80s, ‘Shaolin Intruders’ is full of the intrigue and elevated quality that had been expected of films released under the banner. Choreographer par excellence Tang Chia manages to create a superior blend of the aforementioned assets along with excellent characterisation and enjoyable comedy. The casting doesn’t leap off the page, but Chia crafts a kung-fu adventure that is as much about personalities as it is about action. Jason Pai Piao, in particular, relishes a more light-hearted role than he was used to and puts in a thoroughly endearing performance; many of the great kung-fu films utilise the happy-go-lucky, lovable hero who’s always ready to fight for his friends and ‘Shaolin Intruders’ is no exception. It’s this generic character that can often be so refreshing and Pai Piao succeeds in treading the line between genuinely funny and absurdist. Derek Yee – later to become one of Hong Kong’s most respected directors – plays the handsome hero part that Ti Lung would have played ten years earlier and acts as the perfect foil for his sidekick. Tang Chia also unleashes some very clever twists; instead of the typical unbelievable twists that hinder so many less assured films, these are understandable, but still very surprising. Action wise, ‘Shaolin Intruders’ contains a few stand-out scenes that make up for some of the more pedestrian moments. As the film winds down the fight action gets better, so a few of the weaker confrontations are forgivable. The major drawback that afflicts ‘Shaolin Intruders’ is the poor pacing of certain scenes. This is most evident in the middle section that details the heroes ‘tests’ although starting out well, it soon proves tiresome and goes on far too long.

‘Shaolin Intruders’ doesn’t offer any of the genre-defining moments that leap out of the true masterpieces of the genre. There’s also the previously mentioned thoughts on the odd poorly handled scene and disappointing confrontation. However, this is without doubt another strong recommendation for all Shaw Brothers fans and the like. A classy production.