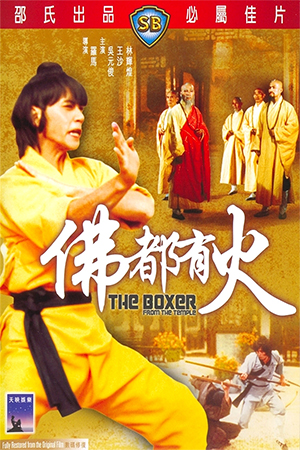 Director John Law Ma tends to be one of the forgotten directors of the Shaw Brothers’ heyday, but films such as ‘Five Superfighters’ and ‘Stroke Of Death’ have ensured that his name still earns respect among genre aficionados. Now, thanks to its recent re-release by Celestial, ‘Boxer From The Temple’ has the opportunity to reach a wider audience and maybe give even more kudos to an underrated film-maker.

An infant boy is left on the steps of Lohan Hall just before his mentally unstable mother unfortunately dies. The orphan is looked after by the kindly monks and raised up according to their manner, though his laziness gets him frequently castigated by his superiors. Unkindly nicknamed ‘Crazy Kid’ on account of his mother’s illnesses, the young lad begins to absorb the information he observes while working in the practice hall. Eventually one of the senior monks aids his learning and Crazy Kid becomes quite capable of handling himself outside of the temple. Life in the secular world takes an unusual turn when Crazy Kid helps the son of a local entrepreneur and is bequeathed a restaurant to run for all of his bravery. Yet the gang who runs the towns affairs takes an interest in the new business and begins to make more and more in-roads into the quiet life of Crazy Kid.

The usual lone warrior against local corruption story gets used for another Shaw Brothers action film and once again the basic synopsis gives little indication as to whether this is anything more than a run-of-the-mill fight-fest. Yet despite a storyline that is interchangeable with a whole host of its contemporaries, ‘Boxer From The Temple’ has a few aces up its sleeve and it produces them at even intervals. Wu Yuan Chun, one of the ‘Five Superfighters’, is the first notable strength of the film, showing aptitude in the many acrobatic fight scenes but also proving to be surprisingly expressive in the dramatic moments. The gentler sub-plot is an opportunity for him to be more than just an aspiring action star and he pulls of these scenes with some aplomb.

The fact that Law Ma so keenly mixes emotions and styles together is the secret ingredient to this being something that little bit special. The early fight scenes have that touch of slapstick that many Shaw Brothers productions deemed necessary following the release of ‘Drunken Master’, yet even then there are some genuinely amusing moments woven into the fabric of the sequences. Much humour is also derived from Crazy Kid’s parochial nature; his naive bewilderment at the outside world is played for obvious, yet relatively heartfelt laughs early on. ‘Boxer From The Temple’ then switches gears to include the romance between Crazy Kid and the young widow he saves, a delightfully shot scenario that comes as a pleasant surprise considering the way these stories tend to be constructed. Law Ma then pulls the rug from underneath us once again by turning the charm and frivolity of the first hour into a far darker creation for the closing thirty minutes.

‘Boxer From The Temple’ is one of those genuinely interesting works that you occasionally stumble upon. It lacks the reputation that other more illustrious works have accrued, but it is perhaps the better for its relative anonymity. Law Ma has crafted an ensemble kung-fu comedy that has a good number of intricately constructed showdowns and a few moments that manage true pathos rather than tacked on emotion. It’s a minor classic that deserves some time in the spotlight.