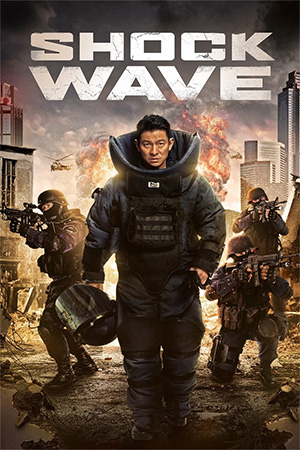 Having wrecked a good portion of Central in ‘Firestorm’, Andy Lau returns to the action genre with the equally combustible ‘Shock Wave’ where this time the focus is on Hong Kong’s Cross-Harbour Tunnel.

Undercover policeman JS Cheung (Lau) is assigned to infiltrate a gang of robbers who use high-power explosives to gain access to properties and steal the booty within. When he joins them on the audacious attack on Hong Kong’s federal reserve, he is forced to reveal his true identity to save the lives of fellow policemen in the ensuing pursuit. Nevertheless, all of the gang are captured except the mastermind who escapes, seemingly never to be seen again.

Seven years pass and Cheung is now the country’s top bomb disposal expert, lauded by his peers and finally in a happy relationship. When random bombs are set throughout Hong Kong Cheung is the first person to turn to and though he is successful in diffusing most of them, one car bomb evades his attention and kills his friend and mentor. All of this proves to be the work of the vengeance seeking bomb expert that escaped seven years before and, now calling himself ‘Blast’, he weaves an intricate plan to make Cheung pay, culminating in taking over the Cross-Harbour Tunnel. Demanding the release of his brother Biao and a significant ransom, Blast and his team of hired mercenaries will only communicate with Cheung and, with hundreds of hostages to bargain with, seem to be one step ahead of the police at all times.

As Hong Kong films become co-productions with Chinese companies and budgets get bigger and bigger, the swagger displayed in local action extravaganzas begins to target the big Hollywood rivals. Yet the mistake in the past has been to throw money at the screen and hope to outdo American efforts, a ludicrous game of one-upmanship that will only have one winner. There’s also been a tendency to forget that the very best of the genre – whether they be Western classics like ‘Die Hard’, ‘The Dark Knight’, ‘Raiders of the Lost Ark’ or Eastern hits like ‘Police Story – are not successful because of the money spent on them, but rather the skill at putting them together. Thankfully, though ‘Shock Wave’ isn’t in the same league as the aforementioned, it is something of a return to combining cutting edge computer effects with good characterisation and reliable old Hong Kong ingenuity.

The fact that ‘Shock Wave’ is a mixture of old and new is perhaps due to the surprising choice of Herman Yau in the director’s chair. For so long seen as an exploitation film-maker, Yau’s recent output has been decidedly more polished yet he has never lost his skill to strip action back to its skeleton. Therefore, while the pyrotechnics are a big budget spectacle, there are also old-fashioned, tightly choreographed gun battles that show the director’s schooling in lower budget fare. Where ‘Shock Wave’ struggles is in its attempt to create a wider political conspiracy narrative involving Liu Kai-Chi, an actor who is wasted in his brief role. It’s not that it is a major miss-step, yet it does feel like Yau is taking us away from the tension of the central scenario.

‘Shock Wave’ is an above average Andy Lau action film that shows that the star can still be called on to play the tough hero when needed. It loses marks for plot-holes, but gains some back for a brave climax that shows that director Yau isn’t afraid to shake his audience up.