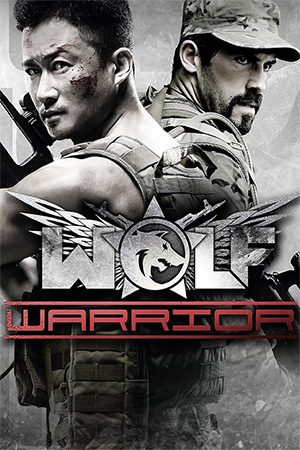 Well the 1980s are back! Wu Jing’s second stab at directing, after ‘Legendary Assassin’, is an all guns blazing, military action, explosions riot. Not since Cannon Pictures closed the doors on their particular brand of explosion happy, gung-ho centric action madness has a film embraced the jingoistic jubilance of blowing stuff up military style with such relish. Sure it’s patriotic to the point of ridiculousness but with Wu Jing and Scott Adkins front and centre, and armed with a budget for military hardware that would probably fund several real life wars, ‘Wolf Warrior’ is an action blast hoot.

Wu Jing is Leng Feng, an expert military sniper who uses his almost super human skills to help diffuse a hostage situation during a drug raid. He kills the brother of a renowned drug lord who then vows revenge on Feng, hiring a team of international mercenaries, led by the ruthless Tomcat (Adkins), to carry out the hit. Due to his expert skills and daring do seen in the opening raid, Feng is recruited into a super elite military team called the ‘Wolf Warrior’s. China’s best of the best, Feng is taken out on a routine training mission with the group and in amongst all the training and bonding with his new crew (and at one particularly outrageous moment: fighting of a pack of CGI killer wolves!), Feng is attacked by Tomcat and his tooled-up goons. Thus the training mission turns into all out war as the two teams go up against one another in a battle of wits and bullets. Well mainly bullets. And explosions.

First and foremost, ‘Wolf Warrior’ is an all-out action film. It doesn’t try to be anything else (other than a propaganda piece – we’ll get to that later!) and is loud and proud to dazzle you with its immense array of military hardware, explosions and relentless gun battles. If that ain’t your thing, look elsewhere. Bigger, slicker and brasher than his previous directorial offering, ‘Wolf Warrior’ is large scale military action full of firepower and pyrotechnics. The action rarely lets up with the focus less on one-on-one fights (which may disappoint Jing and Adkins fans) and more on huge fire-fights, explosions and military vehicles. The action is big, incredibly well staged and cut to a super charged momentum. From the colossal (and insane!) shoot out on the drug lords house to some expertly staged shoot-outs in a forest setting, Jing orchestrates some great big 80s style action mayhem with flair.

Unfortunately, and as many other reviews have pointed out, the film isn’t exactly big on subtly and the blatant propaganda pushing sometimes detracts from the action fun. With the Chinese military seemingly donating a shit ton of vehicles and hardware for the production, it’s not surprising the gung-ho nature of proceedings occasionally takes over: meaning the film intermittently feels like a big, slick recruitment video. However, if you can put aside your need to rant about this/hate of all things remotely jingoistic then ‘Wolf Warrior’ is a lot of slick fun.

Obviously it will appeal more to the crowd that grew up loving big and brash 80s/90s action films (both Western and Eastern) but ‘Wolf Warrior’ does show Jing is becoming a skilled director in terms of action entertainment. He even gets a great one-on-one dust up with Adkins (who plays a great villain) as it would have been disappointing if there wasn’t at least one fight between the two. Ignore the “I Fight for China” ra-ra-ness, embrace the slick cheesiness and enjoy the large scale mayhem.