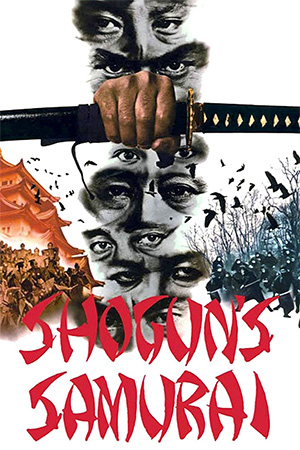 There is upset in Imperial Japan as the Shogun General Hidetada has been poisoned. His eldest son Lemestsu (Matsukata) is next in line to succeed as Shogun but is disfigured and stammers when he speaks: not qualities becoming of a shogun. So it falls to his younger brother Tadanaga (Terukiko Saigo) to take up the reigns but not before the two brothers declare war against each other. Violence rips apart the land as those behind the scenes also plot to get their power with a band of warrior Samurais brought into the mix who then find themselves fighting for their land, their lives and their honour.

Kinji Fukasaku’s (he of ‘Battle Royale’ fame) epic, violent period film is a strictly old school affair attempting to bring back the grandiose of period filmmaking. Clocking in at over 2 hours the film is packed with characters, political intrigue and various battles and confrontations as violence escalates and everyone seems to be driven mad with the possibility of power. Don’t go expecting geysers of blood erupting all over the screen a la ‘Lone Wolf and Cub’. ‘Shogun’s Samurai’ is certainly violent but doesn’t resort to comic book proportions in the action/violence department. We feel every sword cut and blade slash in the many battles that pepper the film, the action going for a more realistic style, as opponents are taken down in one or two strikes. Unfortunately between the well staged Samurai action the drama tends to drag. For every intense scene of political corruption and scheming there are always two or three where characters tend to ham it up and the feel slips into melodrama. This is in keeping with the Chanbara style of the film but it tends to drag some of the tension down and proceedings become somewhat stodgy: one wishing everyone would stop shouting at one another and get on with things.

However, Fukasaku creates a very detailed period the film shot in glorious widescreen capturing all the finites of the costumes and the detail of the period. The old school feel is captured with most of the film shot on location, the action often set in lush locations. Not the best of its kind and it drags a little too much with the running time, ‘Shogun’s Samurai’ is still a decent slice of Samurai drama from a time when they used to make them big. The ending is also a gob smacker and worth sticking around for. In addition, lots of famous faces of Japanese cinema pop up through out including ‘Seven Samurai’ himself, Toshiro Mifune, Hiroyuki (‘Twilight Samurai’) Sanada and the great Sonny (‘The Streetfighter’) Chiba.