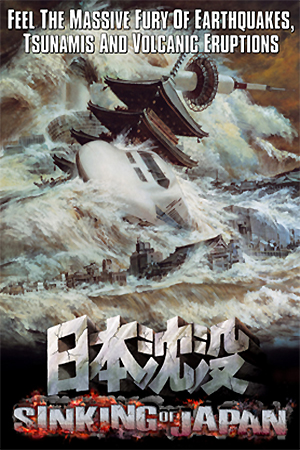 Following a major earthquake in Suraga Bay, Scientists predict that Japan will sink within 40 years due to subduction of a tectonic plate to the west. However, Dr. Tadokoro, who leads an oceanic scientific team, calculates that this will happen in only 338.54 days. He presents his findings to the Prime Minister who decides to create a new department for impending disaster relief. As further earthquakes, tsunamis, and volcanic eruptions devastate Japan, the government pleads with other countries to take refugees. When the Prime Minister flies to China to negotiate relocations, he is killed by a volcanic eruption and minister Saoro Takamori takes over. As time is so clearly against them, Takamori decides that Dr. Tadokoro’s plan to blow holes in the disintegrating tectonic plate is the best remaining hope.

‘Sinking Of Japan’ is Asia’s answer to the recent spate of effects-heavy American disaster movies, such as ‘2012’ and ‘Day After Tomorrow’. Unfortunately though, much like the aforementioned Hollywood snoozefests, the film has little room for the people involved and spends the majority of its bloated running time focusing on several big explosions. Sure, it has a touch of (quite boring) technobabble mixed in with a vague attempt at a romantic subplot, but it all feels so vastly underdeveloped and one-dimensional that we really just don’t care. To make matters worse, the actors always feel secondary as their supposedly emotional exchanges barely last more than a few minutes before we are whisked away to the next CGI segment. Admittedly, the film does suffer a slight resurgence when it hits the ‘Armageddon’ style save-the-day moment, but I think by this stage I was so sick of all the meaningful glances and cheesy dialogue that I just wanted it all to end.

On the flip side, if you are the type of moviegoer that appreciates a handful of natural disasters interspersed with only minor plot points then ‘Sinking of Japan’ could well be the film for you. Aside from all the weaknesses already discussed, there is no escaping that the movie does have moments where it looks exceedingly pretty. We are treated to a number of excellent shots of Japan’s most beautiful scenic wonders, before the film then proceeds to blow the crap out of them in all manner of ways. I know, I know, it’s not exactly Shakespeare and the majority of us crave a little more depth from our cinematic endeavours, but you can’t help but marvel at the work that has gone into recreating such realistic disasters.

If you’ve seen any of the recent Hollywood disaster movies, then you pretty much know exactly what to expect from ‘Sinking Of Japan’. It really is a case of style over substance and I highly doubt that many will walk away from the experience with little more than the memory of a few finely constructed special effects.