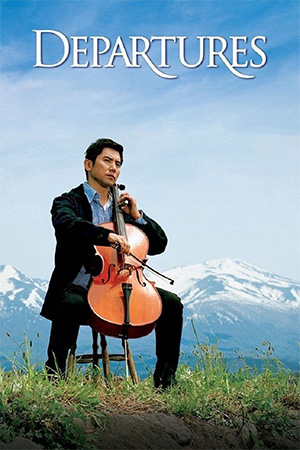 Yojiro Takita has come a long way since his ‘Groper Train’ films. The director who walked off with 2009’s ‘Best Film In A Foreign Language’ Oscar started his career behind the lens with a rash of additions to that very odd Japanese Pink series before building his reputation within mainstream cinema. However unlikely the journey to being the toast of world cinema was, there can be no doubt that Takita’s accrued skills have reached their apogee with ‘Departures’.

After his fledgling orchestra is disbanded, cellist Daigo (Motoki) decides to sell his equipment and go back to the rural town of his birth. Disillusioned with his own musical skills, Daigo takes his wife with him to Sakata for the first time before his mother’s death years earlier and takes up residence in the cafe she left him in her will. Memories of his feckless father – who left the family to fend for themselves when he was young – continues to haunt Daigo who is accustomed to bottling up his painful emotions within. This stoic exterior proves quite an asset when he unknowingly takes a job in a funeral parlour and has to keep it a secret from his wife and friends.

When his role as an encoffiner is discovered, he is given an ultimatum by his wife and shunned by the neighbourhood. Yet Daigo has come to appreciate the importance of the work he does and the comfort it brings the surviving relatives, continuing this Japanese tradition despite outside pressure. Along with his wise old employer, the understudy gets the opportunity to offer support to the town’s inhabitants in their saddest moments and begins to soothe his own pain vicariously.

Tackling a taboo subject with maturity and outstanding sensitivity, it should be of no great surprise to see ‘Departures’ striking a chord with audiences around the globe. The story may focus on a traditionally Asian aspect of the mourning process, but the emotional resonance of seeing how Daigo helps with his customers’ ‘departures’ is presented in a way that every viewer should be able to empathise with irrespective of their cultural background. The job of ‘encoffining’ – which encompasses the preparation and cleansing of the body in front of the sobbing relatives – is beautifully shot. That may sound an unusual description of the event seen throughout the story, but Yojiro Takita directs these moments with a breath-taking dignity. There is a thankful lack of an intrusive soundtrack during these frames and the attention to detail of their work makes it a fascinating, though upsetting set of sequences.

‘Departures’ is just as cogent when it looks at human relationships. Takita paints a picture of a society where the living are just as compromised as the dead and the things unsaid weigh heavy on the faces of the protagonists. This is achieved through the ability of the cast – Tsutomu Yamazaki is especially strong among this excellent cast – and our director’s ability to keep the story away from histrionics. Some of the most haunting moments are when the surviving relatives show their appreciation to the duo after the ceremony and their work is given the only acclaim that matters. ‘Departures’ is not a film that produces any shocking twists, but then the narrative is best dealt with in the pragmatic way that the makers choose rather than any operatic outpourings of grief.

Ultimately the story becomes about communication and redemption. The final sub-plot is fairly easy to telegraph though that makes the conclusion all the more profound. Any of the few critics who have accused ‘Departures’ of turning ‘sentimental’ near the end would probably prefer a Bergmanesque iciness to the themes, but this humble reviewer cannot think of a better example of this subject matter being handled on screen. Sometimes Japanese cinema exhibits a delicate intricacy that reminds one of the culture’s ornate rituals of cuisine and etiquette; the precision in which every movement and every word is performed is almost hypnotic. ‘Departures’ balances this with a compassion that befits the style as much as the substance.  This is first-class film-making.