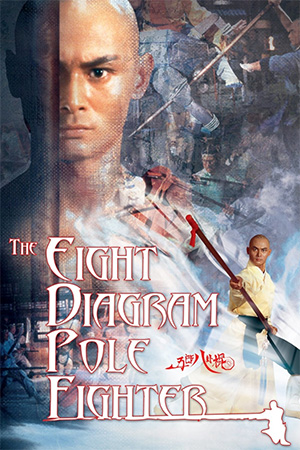 I’ve probably stated this numerous times during the writing of these various reviews, but the martial arts genre is one of the most misunderstood and wrongly vilified forms of film-making around. It’s true that there have been some truly horrendous efforts to have leaked out of the genre, but there have also been some significant masterpieces. Long before ‘Crouching Tiger, Hidden Dragon’ showed people how the martial arts film could be a worthwhile cinematic form, there were a number of productions that stood out as works of sheer excellence. Liu Chia-Liang’s triumphant ‘The 8 Diagram Pole Fighter’ is widely considered among this exalted crowd. Aside from its immense credentials as a film, it also proved to be Liu Chia-Liang’s last spectacle under the Shaw Brothers banner and, tragically, the great Fu Sheng’s last appearance before his death.

The storyline revolves around the loyal Yang family who use all of their military prowess to support their rulers. The bitterly jealous general Pang Mai looks for a way to usurp the good standing the Yangs have accrued and plots with the ruthless Tartars to do so. In the film’s nightmarish opening, this plan is carried out and the Yang warriors are ambushed by their vicious enemies. Not only do the Yangs find themselves with little chance of survival, they also realise that they have been set up as traitors. In the ensuing battle the Tartars slaughter the Yangs and only the fifth and sixth sons manage to escape. The sixth son (Fu Sheng) is driven insane by the trauma of the massacre and spends his time under the watchful eye of his mother and sisters. Meanwhile the fifth son (Liu Chia-Hui) is saved from death by a brave hunter who lays his own life on the line for the sake of the Yangs. Desperate for revenge, the fifth son heads towards the local temple to take stock of what has happened and refine his pole fighting skills. After persuading the abbot of his desire to learn the monks’ pole style, the fifth son marches to a final confrontation with those who have devastated his family. In one of the Jade Screen’s finest finales, the heroic avenger is joined by his sister and a band of monks in this emotionally-charged battle.

Multi-layered and superbly made, ‘The 8 Diagram Pole Fighter’ remains one of the greatest martial arts movies of all time. Few films before or since have reached the level of intensity and power that this has; from the acting to the directing, everyone involved here gives of their very best. For anyone ignorant enough to base their judgements of the martial arts genre on clichés and low quality rubbish, this will prove to be a real awakening. Liu Chia-Liang manages to create a very bleak and almost hopeless landscape with liberal use of the Shaw Brothers soundstage vividly distorting the atmosphere. Coupled with the peerless direction is a series of performances that are worthy of praise; Liu Chia-Hui and Hui Ying Hung are totally convincing in their roles while Fu Sheng’s descent into insanity is shockingly effective.

Although this stands as a masterpiece without any mention of the action, the scenes of combat are what may attract many viewers. On this merit the film again scores full marks with a few incredible fight scenes really burning themselves on the memory. Foremost among these is the memorable climax and the one-on-one pole fight between Liu Chia-Hui and Kao Fei. The aforementioned pole duel between master and student is simply one of the greatest martial arts sequences ever seen. Nearly twenty years since its release it is still a flawless piece of choreographic genius.

Whether you consider yourself a connoisseur of kung fu films or just great works of cinema in general, ‘The 8 Diagram Pole Fighter’ is a major achievement.