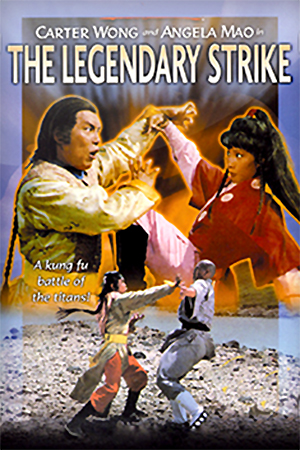 Director Huang Feng never quite made the transition from an above-average kung fu film director to a truly great one. Nonetheless, when Hong Kong legend Sammo Hung mentioned him as an influence on his own directorial career, Huang’s credentials as a film-maker surely deserve attention. With ‘The Legendary Strike’, Huang Feng shows viewers the difference between the standards of his work with the endless other genre directors.

A Chinese relic becomes the subject of much interest from various devious parties who inhabit the martial world. This ‘Dharma’s Relic’ is sold by scheming Lord Yeung (Carter Wong) to a Japanese envoy who then hides it on his person before he leaves the palace. On the journey back to Japan, the relic’s new owner is attacked and killed by a fighter who fails to find the whereabouts of this treasure. This fighter is then confronted by a supposed Shaolin monk (Kam Kong) who defeats him before he also looks around for the valued item. Watching these events from a safe vantage point is Tan (Chu Kong) who begins to work out how and where the relic is likely to have been hidden. Therefore he takes the corpse of the monk’s victim and decides to travel with the body until he has an opportunity to investigate further. The monk decides to follow along and also discover how much this newcomer knows before he makes his move. Meanwhile Lord Yeung grows increasingly incensed by the events and decides to send some of his best men to get back the relic and eliminate anyone involved. Min (Chen Sing), the Lord’s most feared underling, chases after the suspects with a few top fighters in tow. Tan is one step ahead of his rivals though and forms a useful alliance with Ming patriot Chin (Angela Mao) who agrees to help her fellow Ming-supporter. Lord Yeung’s ruthless ambition is constant and he elects to lure out his enemies by taking a whole village hostage and promising to execute them in the morning unless the relic is returned.

With a storyline that’s hardly out of the ordinary for the genre and a band of well-worn characters, ‘The Legendary Strike’ doesn’t seem to be anything out of the ordinary at first glance. However, its merits are truly found in Huang Feng’s execution of the basic material; there’s a potential for matters to become very convoluted by the end of the film, but Huang’s assured handling means that this is never the case. Although there’s the odd hole or inconsistency, the production mostly runs at a sustained pace that draws the viewer along with it. The main reason why the ‘The Legendary Strike’ doesn’t come across even better is due to a few false steps in other departments of the film. Chu Kong is a very able lead actor with a strong command of the material, but he’s quite blatantly not a screen fighter. Therefore scenes of action involving him are filmed in an awkward manner to hide the obvious use of a stunt double. This naturally hinders the anticipated finale and dampen the potential sparks on offer. Thankfully Chu is surrounded by a cast of some of the genre’s greatest names: Angela Mao doesn’t quite match up to the performances of her heyday, but still shows what a great asset she was to any film; Chan Sing is yet again the villain par excellence, powerful and imposing throughout; Casanova Wong rounds off the cast with yet more of his glorious bootwork. There’s plenty to enjoy here and relatively little to grumble about. ‘The Legendary Strike’ therefore proves to be a genre flick that stands out from the crowd.