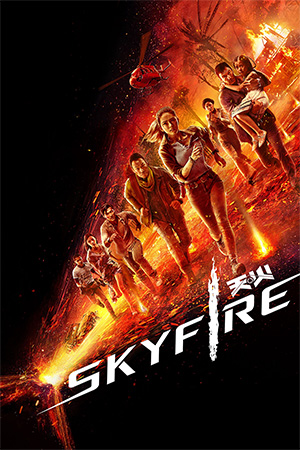 Li Xiaomeng (Quinlivan) is a young geologist who is haunted by the death of her mother during a sudden eruption of the resident volcano on Tianhuo Island, an incident she witnessed as a little girl. Li returns to the island as a sceptical member of a team of experts hired by a luxury resort who are about the open. The dormant volcano looms large and Li and her estranged father are drawn back when it seems as if it may not be as dormant as previously though. However, with millions invested by near-bankrupt developer Jack Harris (Isaacs), the Open Day goes ahead against recommendation and when rumblings are heard, the lives of thousands could be in danger.

‘Skyfire’ is a suitably big and brash disaster epic that mimics the bombastic Hollywood productions that reached their apex in the 1970s. In that period, anything that could explode and bring untold destruction on a cast of ageing film stars was fair game – from ‘The Towering Inferno’ until ‘When Time Ran Out’ (which this is, in many ways, a remake of) in 1980, this was a particularly fertile concept for film-makers. Now furnished with the money and technical know-how to compete with the big Western studios, Chinese cinema has begun to inch into the genre; ‘The Captain’ (reviewed elsewhere) was a big local hit at the end of 2019. Yet, despite impressing with its impressive effects, like ‘The Captain’, ‘Skyfire’ suffers from some of the same problems that lesser efforts tend to fall prey to.

Understandably, ‘Skyfire’ starts with a big bang – the opening ten minutes are possibly the highlight of the film and show the swaggering expertise of Chinese cinema today. And then the cliches start. It’s impossible to make a disaster film without cliches – so familiar is the conventions of the genre to most audiences – but there are ways of delaying the inevitable contempt born of familiarity. ‘Skyfire’ goes straight into the usual dynamics: estranged family; greedy big business ignoring warnings; romantic sub-plot; last-minute rescues; character redemptions – all present and correct. Each of these or so easy to telegraph, though, that it almost becomes a game in which the viewer can predict the exact minute the said cliches will turn up.

The other problem that is especially prevalent in lesser disaster epics – and sadly shows itself here in abundance – is how unrealistic events are. Again, cinema of this nature calls for a suspension of disbelief, but here disbelief is pretty much hit of the head with a shovel and buried in a shallow grave. While watching, my wife eagerly pointed out how utterly preposterous huge sections were (she was especially impressed with how close characters could get to lava with only a mild discomfort showing on their faces) and had she been on shots for each ludicrous moment, she would have been inebriated just after the appearance of ‘loveable orphan no.1’.

‘Skyfire’ is the kind of film to watch on the big screen. That’s the arena where impressive visuals projected on a vast screen and pounding surround sound presented in an enclosed space can stupefy an audience into cheering on the proceedings. Even then, when the ears have recovered and eyes acclimatised to the world outside, the empty feeling of what a waste of two hours that was becomes clear. On the small screen though, the faults of films like ‘Skyfire’ are easy to spot and much more difficult to forgive.