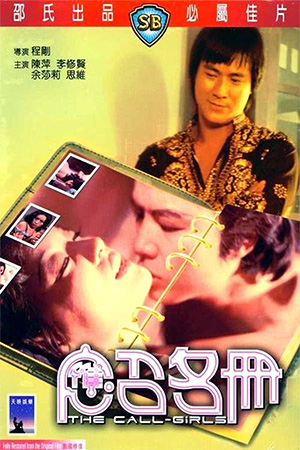 A carefully planned and executed police operation nets itself an unexpected bevy of starlets as well as a critically damning piece of evidence: a “call girl directory” that details an indisputable network of links to the popular film industry. During preliminary interviews, the investigating officer (Danny Lee) unearths troubling tales of deception, coercion and blackmail. Initial interviewee and former streetwalker Lau Ah Ling (Lau Nga-Ying) reveals how she was talent-scouted by photographer Chau (Lam Fai-Wong), whose nude photography guaranteed her body double work at the studios.

Secondary suspect and leading soft-core actress Lee Ming (Chen Ping) imparts how she was ushered from sets to secretive rendezvous’ with dentist Dr Yun (Cheng Miu), to the eventual suspicion of his wife and patients. Lee also outlines two additional tales of despair: that of seventeen-year-old starry-eyed hopeful Chan Ying (Cheng Suk-Ying) who was deceived into a contract of servitude by film director Lam (Bobby Canavarro) and agent Ling (Lau Wai-Ling), whilst in the shadows her virginity was being sold off to the highest foreign bidder.

And lastly, glamorous high-profile starlet Pak Siu Nam (Shirley Yu) is coerced back into prostitution at the threat of her sordid pre-fame “working girl” career bearing exposure to the media. All the while grimy promoter Wang (Antonio Ho) and agent-cum-procuress Ling revel in the capital gain that their illegal human trade returns.

Cheng Kang’s ‘The Call-Girls’ (1977) is proof, perhaps more than any, that the adage “the more things change, the more they stay the same” is a truth that stretches far further back into Hong Kong cinema history than the glut of true-crime thrillers, which drew their source material from “hot topic” news headlines, from the nineties. Lee Wing-Cheung’s fictionalised script, purportedly culled from a variety of actual documented cases, grabs a sensationalist news story (film industry actresses and associates implicated in high-class escort rings; a persistent rumour that dogged the Hong Kong film industry well into the nineties) and turns it into an equally sensationalist sexploitation drama. Rumours held that the Shaw studios were so desperate to have ‘The Call-Girls’ in the cinemas whilst the scandal was still topical, that they enlisted the services of house directors Chu Yuan and Sun Chung to help speed up production. What remains as the final product is a film that is a fascinating reflection of its era, if not deliberately exploitative of its subject matter, and surprisingly relatively engaging.

Having worked with the Shaw studios commensurate with ‘Kiss and Kill’ (1967), and seldom having strayed far from the company’s stalwart martial arts genre, director Cheng kicks things off with faux-interviews with some of the Shaw’s most recognisable players; from directors such as Chang Cheh, Hua Shan and Mou Tun-Fei to (then) popular actress Lin Chen-Chi, probing for comments over the infamous “call girl directory”. Once this tongue-in-cheek diversion is dispensed with, the film proper begins and the structure is not unlike that of the episodic narratives of Li Han-Hsiang’s sexy seventies anthologies, with Danny Lee’s police officer becoming something of a surrogate narrator. Unlike many of its peers of the time, ‘The Call-Girls’ is literally awash with nudity (topless and frontal, per the relaxing climate of censorship in the region) from its earliest moments to its climactic images; accordingly, it’s not really a film that is suitable for the easily offended or younger viewers. For the mature viewer, there is some moderate amusement to be gained from the absurdist excuses the filmmakers create just to ensure another starlet is shorn of her garments; come the notorious nude funeral procession, said excuses have been pushed to their wildly unbelievable limits.

Exploitative content aside, which surely will count as the selling point to a certain fringe pocket of viewers, ‘The Call-Girls’ benefits from a fine cast of some of the era’s most bankable adult screen sirens. ‘The Sexy Killer’s (1976) Chen Ping appears across the second and third story, though by this stage of the game she was starting to become much less daring than the phalanx of starlets that surrounded her. Lau Nga-Ying, as streetwalker-cum-actress Lau Ying, turns in a feisty, uninhibited opening performance and is well complimented by ‘Innocent Lust’s (1977) Cheng Suk-Ying, in the third episode as the starry-eyed teenager who pays most harshly for her dreams of fame. Rounding out the titular leading ladies is cosmetically-enhanced Shaw sex-siren Shirley Yu, who initially appears exhibiting a tough, gutsy persona that eventually gives way to tragedy and despair; perhaps a precognitive act of art foreshadowing life, Yu’s post screen-icon story remains one of real-life misfortune. And not forgetting regular Shaw heavy Antonio Ho (‘Ghost Eyes’, 1974) as promoter and contractor Wang, as his sleazy characterisation really gives the audience a central villain and in turn a focal figure to loathe for main girls’ misfortunes.

Those expecting perhaps a serious treatise of the oft-recounted, and infamous, high-class escort legend associated with the Hong Kong entertainment industry, might find ‘The Call-Girls’ somewhat lighter and tongue-in-cheek than its subject matter would intimate. However, it is no more exploitative or sordid than any similar production focusing on the same topic, and potentially far less cruel and brutal than successive escort dramas like David Lam’s ‘Girls Without Tomorrow’ (1988) or Michael Mak’s ‘Moon, Star & Sun’ (1988). Even Matt Chow’s ‘PR Girls’ (1998) pushed the envelope of acceptable bad taste by closing out with a scene of harsh, prolonged sexual violence that left a bitter aftertaste; though Cheng Kang’s earlier film touches on the more unpleasant misfortunes of the respective girls’ lives, it thankfully never once descends into the leering, misogynistic barbarity that would ensue in later years. ‘The Call-Girls’ remains very much a product of its era, in that it focuses on its leading ladies’ generous charms and delivers a saucy, ribald jaunt through tales that could easily have degenerated into debauched and disturbing male-dominant fantasies in the wrong hands. It entertains, titillates and amuses, as well as throws in a hint of social commentary as afterthought, but it’s a giddy, gaudy way to spend some time, providing of course that the subject matter itself doesn’t offend one’s sensibilities to begin with.