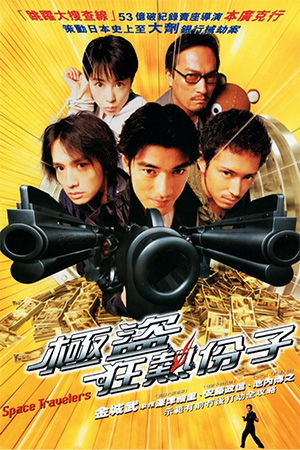 For the majority of mainstream movie-goers, Japan’s primary cinematic offerings seem to revolve around the antics of giant rampaging monsters or masked assassins. However, ‘Space Travelers’ is a new action/comedy that proves Japan has plenty more to offer.

Three orphanage buddies have always dreamed of heading for a tropical paradise but they lack one important commodity – money.  In an attempt to make their dreams come true, they decide to rob a bank with the intention of getting in and out as quickly as possible. Unfortunately, the situation starts to go a little pear shaped when the manager and the security guard lock themselves in the vault with all of the money.  Meanwhile, word of their activities has reached the authorities and the gang are about to find themselves faced by cops, terrorists and, worst of all, angry customers.

‘Space Travelers’ is probably best described as a comedy that lies somewhere between a mix of ‘Killing Zoe’ and ‘The Breakfast Club’. And much like those aforementioned outings, the key to the film is not the peripheral events that occur but the relationships that develop between the people confined together. Throughout the course of the film, we get to see a number of entertaining and humorous confrontations as well as some blossoming relationships that really draw you in. The film is also aided by a very comic book style that not only makes the film look visually appealing, but also highlights the cast’s purposefully zany and over-the-top performances.

It’s also clear that ‘Space Travelers’ was not a cheap production. There are a number of big stunts and CG effects that are all suitably impressive, and these are further enhanced by some nifty camera work. However, it is worth pointing out that this is not what you would consider an action flick, as even though there is some fun gunplay it is by no means the focal point of the movie.

‘Space Travelers’ is a really entertaining ride that delivers thanks to a pacey script, genuine moments of amusement and enjoyable performances from everyone involved. If you feel like watching a very modern and effective Japanese comedy then this is certainly a good place to start.