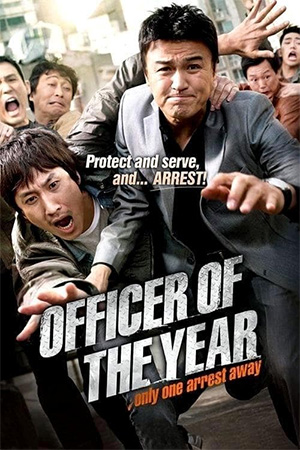 Two neighbouring districts in Seoul, Mapo and Seodaemun, boast police forces so eager to make an arrest that they end up literally fighting over a ecstasy trafficking suspect. This devotion to the task is less to do with a sense of righteousness and more to do with their ongoing competition to see who accrues the most points at the end of the year. Mapo’s chief detective is Sneaky Hwang (Park Joong-Hoon), an experienced officer who does whatever it takes to win the competition, even if that means ignoring the more time-consuming cases to go for the easy pickings. When Seodaemun receive a graduate from a prestigious police academy, Jung (Lee Sun-Gyun), the contest steps up a level as this newcomer is desperate to win the cash prize that comes with the ‘Officer of the Year’ accolade.

The rivals resort to all sorts of tricks to slow down their opponents, but in so doing begin to drift away from the very purpose of their jobs. When Jung promises to bring an elusive serial rapist to justice (and bag the accumulated points!) and Hwang restarts his own investigation into the crimes, both policemen are given just two weeks to solve the case otherwise it will return to the untouched archive files.

It must be said that a film trying to make light of a police force chasing points for a competition rather than pertinent cases could be a little uncomfortable. It could be executed as a black comedy or a strong satire on modern law enforcers whose hands are tied by bureaucracy and inane league tables, but an populist action-comedy? A truly hard sell. And yet ‘Officer of the Year’, a debut feature from writer/director Lim Chan-Ik, pulls off this imposing task with aplomb.

The film works by being genuinely amusing and featuring two of Korea’s best leading men as rivals; both actors are adept at comedy and drama which becomes very useful as the tone changes. Importantly ‘Officer of the Year’ does not mock the serious crimes it presents, but shows how ludicrous situations and motivations can come about by modern obsessions with awards and fame. As such it manages to operate quite admirably as a satirical swipe on glitzy Korea and throws some food for thought into the heady mix.

As a Korean action-comedy, you can pretty much set your watch by the sudden switch in tone – as soon as you get past the hour mark ‘Officer of the Year’, with remarkable precision, turns from goofball humour to dramatic thriller. So often this is the death knell of a film and too many Korean efforts have been hamstrung by the incongruous themes of the two halves. To the credit of Lim Chan-Ik though, this particular hybrid is a healthy beast rather than a corrupted mutant and works surprisingly well as a police procedural thriller. It brings to mind ‘Memories of Murder’ which nailed this challenge as perfectly as any film has before or since; ‘Officer of the Year’ isn’t up to that standard, but is far better than its premise might suggest.