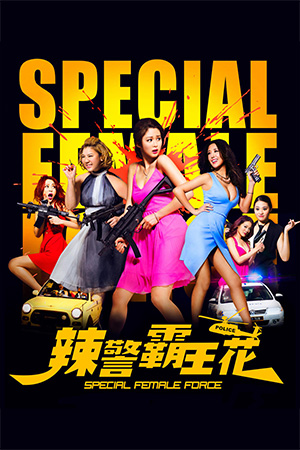 Twenty years after a special female led task force is double-crossed on a mission and all but one are slaughtered, a new team of cadets join the police academy. Among the newcomers is the daughter of one of the murdered agents who has vowed to avenge her mother’s murder. Alongside her are a team of misfits who have their own reasons for joining the force and when the unlikely heroines successfully combine they find themselves fast-tracked to a special mission.

‘Special Female Force’ is, as so many recent films have been around the world, an unabashed throwback to the 80s. A 21st century remake of ‘Inspector Wears Skirts’ by another name, Wilson Chin’s action comedy is a fully blown blast from the past, an attempt to look back at Hong Kong cinema’s glorious past. Unfortunately, there is a reason that even slight fare like the original ‘Inspector Wears Skirts’ succeeded and this doesn’t.

‘Inspector Wear Skirts’ was a not always successful mix of fights and fun, but for the most part it got the combination just about right. The low brow humour worked and the action – especially the book end set-pieces – made it a relatively memorable experience. Subsequent sequels favoured puerile comedy over fisticuffs and the law of diminishing returns was in full effect. ‘Special Female Force’ is like those latter follow-ups, a film desperately in need of direction on what tone it wants to set. Hong Kong has always spliced genres together with aplomb, but this is an example of where things go wrong.

‘Special Female Force’ does occasionally divert with gunplay and exotic locations while the cast – including ‘Black Cat’ herself, Jade Leung – isn’t without merit. Nevertheless, as a whole this is a flawed return to a piece of nostalgic cinema that may have been better left in the past.