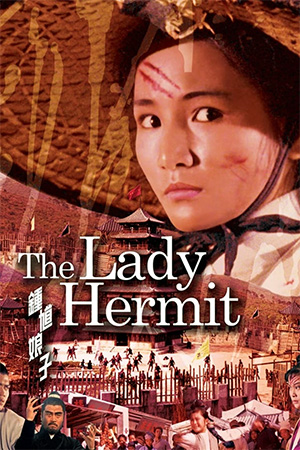 On her journey to find the legendary Lady Chung Kuei, or Lady Hermit, Cui Ping (Shih Szu) wanders into Baijing Town, a small rural village beset by a series of ghostly murders. There she takes up temporary lodgings with village chief Wang Cheng En (Fang Mian) and befriends his housemaid Leng Yu Shuang (Cheng Pei-Pei), as well as sets her heart on local swordsman Chang Chun (Lo Lieh). Suspicious of the nature of the murders, Cui proves the ghostly slaughter a ruse of regional warlord, and bitter enemy of the Lady Hermit, Black Demon (Wang Hsieh) who has engineered the killings to draw his nemesis out of hiding.

With the conflict unnecessarily complicating itself, Leng reveals herself as the Lady Hermit and sets to the road to prevent disaster falling upon the township. Cui begs Leng to take her on as her student, so that the two might band together to defeat the Black Demon and, along with Chang Chun, the trio commence training and combat tactics so that they can successfully overthrow the powerful tyrant. However, the Black Demon has mastered the Shadowless Claw technique, and Yu Shuang has already spent three years recovering from their last clash.

Having previously worked with the Shaw Brothers “Queen of Swords” Cheng Pei-Pei on ‘The Jade Raksha’ (1968) and ‘Lady of Steel’ (1970), as well as helming the impressive wuxia dramas ‘The Killer Darts’ (1968) and ‘Vengeance is a Golden Blade’ (1969), director Ho Meng-Hua (1923 – 2009) drew on Chinese historical folklore, and the formulaic trappings of the genre, to deliver what would end up being Cheng’s virtual swansong as the Shaw’s premiere martial maiden. Excepting Lo Wei’s ‘The Shadow Whip’ (1971), released five months later, the original intent of the production had been a handing of the torch down from Cheng to their new discovery, Taiwanese ballet dancer and model Shih Szu. Whilst The Lady Hermit did go on to successfully launch the career of the (then) eighteen-year-old ingénue, Ho’s film is more than dominated by Cheng in one of her last major martial arts roles prior to her eventual return to the genre in Ang Lee’s ‘Crouching Tiger, Hidden Dragon’ (2000).

Finding its origins in Chinese historical fiction, ‘The Lady Hermit’ offers a gender-reversed take on the popular folk tales of the character Chung Kuei, a patron saint of travellers thought to protect them on their journeys from evil spirits (much akin to St. Christopher in Roman Catholic and Christian beliefs). Reference to Chung Kuei could be found as far back as the Southern and Northern Dynasties (420 – 581 AD), before he was immortalised in print amongst the works of Qing Dynasty (1644 – 1912) novelist Liu Zhang. The works were considered among the most influential in Chinese literary history, however his deeds were far more supernaturally connected than that of his female counterpart in Ho’s sword-fighting drama. Cheng’s Lady Chung Kuei is a moralistic female warrior, wounded in battle, who bides her time plotting her revenge in the guise of a simple housemaid, and the acts of murderous ghosts are quickly exposed as a conceit to draw the central villain’s opponent back into active duty. In ejecting the fantasy elements of the character’s literary origins, Ho grounds his story in a far more believable world, albeit one exhibitive of the super-powers of wuxia heroes.

Whilst the martial arts choreography of Leung Siu-Chung, whom Ho had used on the previous year’s ‘Lady of Steel’ (and would go on to work alongside future choreography master, Tony Ching, on the epic adventure ‘The 14 Amazons’, 1972), is smart, snappy and extremely punchy in its execution, there are deficits against ‘The Lady Hermit’ that somewhat parlay its reputation as a classic of its genre for the contemporary viewer. To avoid the overly familiar formulaic plotting consistent with the kung fu genre, screenwriter Yip Yat-Fong (‘Guess Who Killed My Twelve Lovers?’, 1969) injects a love triangle into proceedings, that otherwise slows down the mid-section of the film while trying to lend some much-needed drama to the narrative. Cui Ping falls for Chang Chun at first sight, but Chang harbours an unspoken love for Yu Shuang and, through a rather clumsy plot-device, the two make their hidden desires known to one another. Of course, this is then utilised as a springboard for the film’s final act: the showdown between Lady Chung Kuei, her students and the Black Demon and his men. Although a necessity of the story, the results do leave the middle of the film sagging, even though Ho punctuates the coy romantic elements with a couple of bloodthirsty fight scenes to keep the omnipresent conflicts buoyant.

The other deficit is Shih Szu herself. Although Shih would go on to effectively take the mantle from Cheng, here in her leading debut the eighteen-year-old is stiff as a board and delivers a performance that is less acting than it is essentially just “making faces”. Although her background as a ballet dancer assists admirably in her many fight sequences, with wires and without, it would be a few years before Shih would grow into what could be termed a competent actress (comparing her performance here against later roles in titles such as ‘The Shadow Boxer’, 1974, and ‘The Bloody Escape’, 1975, her maturation as an actress becomes all too obvious). Thankfully, of the remainder we have leading lady Cheng Pei-Pei commanding such screen presence that she manages to all but diffuse the limitations of her co-star, and Indonesian-born Lo Lieh (1939 – 2002) acquits himself pleasantly in yet another affable, chivalrous swordsman role that he was renowned for in the era, akin to those of ‘King Cat’ (1967), ‘The Invincible Fist’ (1969) and ‘Twelve Deadly Coins’ (1969). All-purpose bad-guy, and prolific character actor Wang Hsieh, of ‘Lover’s Rock’ (1964) and ‘Summons to Death’ (1967) fame, rounds out the major cast as tyrant Black Demon in scene-stealing style.

For what it is, and of its era, Ho Meng-Hua’s ‘The Lady Hermit’ (1971) is most definitely a standout amidst the wandering swordsman genre and still entertains, forty years on. There is a plethora of tightly-choreographed and effectively brutal swordplay sequences that make striking use of their surrounds, inclusive of battles in a bamboo forest and on a suspension bridge. Unsurprisingly, the combat is almost always extremely bloody as well (per the pioneering efforts in realism of veteran director Chang Cheh), so viewers can expect showers of stage blood as well as severed limbs, heads and chopstick perforated eyeballs to splash across their screens. Ardent film buffs may even notice snatches of John Barry’s (1933 – 2011) ‘On Her Majesty’s Secret Service’ (1969) score pop up here and there during key moments in the film!

However, Shih Szu’s embarrassing novice acting and lengthy romantic dalliances aside, ‘The Lady Hermit’ still manages to stand up well decades on as an extremely entertaining, if not extremely gory, example of the Shaw Brothers armed combat films in their prime. It would be another year before imported Korean director Jeong Chang-hwa (under the Chinese alias Cheng Chang Ho) would completely redefine the playing field with ‘King Boxer’ (1972) and a year after that before the full force of Bruce Lee’s influence would be felt. But before those changes occurred, you have Cheng Pei-Pei in one of her signature (swansong) roles and a film that easily ranks amongst the best of its genre of the era.