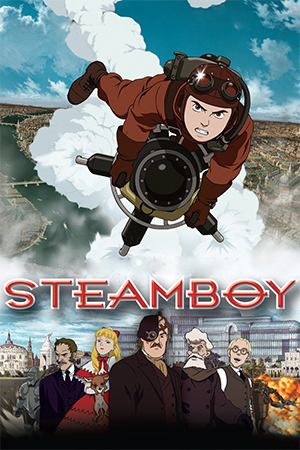 Katsuhiro Otomo did not lay idle after completing ‘Akira’ in 1988.  Supervising and collaborating other projects, he had a hand in such internationally recognized anime as ‘Memories’, ‘Osamu Tezuka’s Metropolis’ and Satoshi Kon’s masterful ‘Perfect Blue’.

But, the little-seen live action ‘World Apartment Horror’ aside, Otomo’s last sole directing credit was for the mighty ‘Akira’.  So, high expectations for ‘Steamboy’ were inevitable.  Almost as inevitable is how disappointing the film is.  ‘Steamboy’ is an undeniable thrill for the eye, but the story begins with a bang only to fizzle out rapidly, leaving a succession of protracted repetitive action sequences.

From the writer of uber-manga ‘Akira’ and ‘Domu’, with input from Millennium Actress scribe Sadayuki Murai, the plot is disappointingly superficial.  In Victorian England, bright, inventive kid Ray Steam becomes embroiled in weapons manufacturing when his grandfather and father create a “steamball”, a metal sphere capable of producing tremendous energy.  Ray’s grandfather realizes the ball’s destructive power and tries to destroy it, but capitalist weapons dealer, Archibald, and Ray’s father, disfigured and traumatised while conducting research, wish to unleash the full potential of the discovery.  In London, a showdown is set between Ray’s unhinged father and industrialist Robert Louis Stevenson (yes, that one), ostensibly wishing to prevent the steamball being used as a weapon, but carrying a darker agenda.

The film’s undisputed triumph is the animation, with astonishing attention to the minutiae of the steam-powered perambulators such as Steam Sr.’s mobile fortress.  Otomo shares Miyazaki’s love of depicting flight, and when Ray takes to the skies with his steam rocket pack, the giddy exhilaration of gravity defiance is akin to the first viewing of Raimi’s ‘Spider-Man’.  But, that the destructive finale takes place in a ludicrously empty London removes a crucial sense of danger, and keeps the audience two-steps ahead of the pictures.

The final impression is that Otomo’s steampunk epic is much like a billow of steam: diverting for a while, but once it stops there is little indication it ever actually happened.  A two-star film rose to three because of the animation.