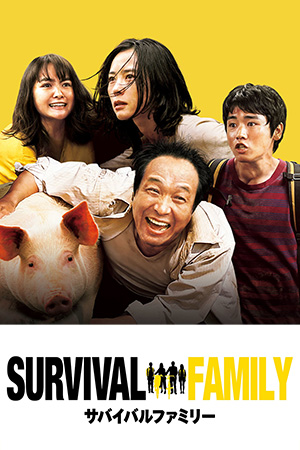 Following the enjoyable but slightly underwhelming ‘Wood Job!’, Shinobu Yaguchi – one of my favourite Japanese directors – returns with a typically dry comedy though with a dramatic core.

A Tokyo family – a stressed city worker, his wife and two disinterested children – barely communicate in their day-to-day trudge. One event suddenly changes everything though: a power-cut strikes the city and most of Japan, leaving the area in total darkness. At first this is expected to be a temporary problem and the family – along with the millions of others in the city – treat it as an annoying inconvenience. As the days pass and there are still no answers though, the family head elects to take his family across the country to stay with his own father whose back-to-basics way of living might be the answer to the problem. Yet, with transport grinding to a halt, food scarce and the ruthlessness of fellow travellers revealing itself, getting there might not be that easy.

‘Wood Job!’ might not have been Yaguchi at his best, but ‘Survival Family’ is certainly a return to top form for the Japanese director. Yaguchi’s style has developed from the quirky, slightly surreal films of his formative years (‘Adrenaline Drive’ comes to mind) to bigger, bolder statements that are still laced with his deliciously bone-dry wit; ‘Survival Family’ is a superlative example of this marriage of the two elements.

Though this isn’t quite a post-apocalyptic film, it does have some interesting things to say about mankind’s reliance on technology and the strange alienation that goes with it. As this is a more subtle commentary on society, there aren’t any rampaging mobs or ‘The Road’ style bands of cannibals. That said, the dynamics of the family are very well examined and although the story presents a minor cataclysm, it is one that trickles down throughout its characters. It is never a simplistic rose-tinted view of a more old fashioned lifestyle, merely a reminder that society are in danger of moving so far away from basic decency.

‘Survival Family’ is a seamless mixture of comedy and drama. The humour is never forced and the drama never over-cooked, meaning that as a whole, the film hits its targets with remarkable accuracy. A small-scale disaster film perhaps, but one peppered with pathos and razor sharp observational comedy. Yaguchi is back to his best.