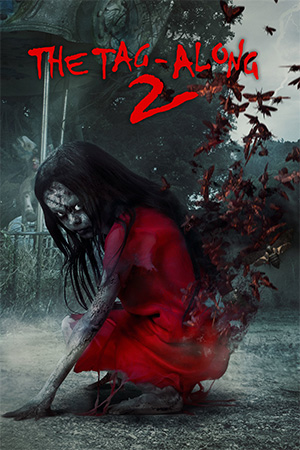 Slick and spooky sequel to the box office busting Taiwanese original, ‘The Tag-Along 2’ is an enjoyable though wildly uneven ghoul-fest that ultimately gets by on its strong first hour. The first ‘Tag-Along’ was based on a video released, and the subsequent urban legend mythology spun from it, showing a group hiking in the Taiwanese countryside (back in the 80s) being followed by a little girl in red. The group swear they did not know the young child or were even aware she was there, with member’s consequently mysteriously dying.

‘The Tag-Along 2’ further explores this concept when social worker Li Shu-Fen’s (Rainie Yang) estranged daughter goes missing after an argument. Video footage shows her being lead away by a ghostly girl figure dressed in red and taken deep into the surrounding forest.  As Shu-Fen’s frantic search escalates, she seeks the help of local shamans but it’s the mother of a child taken into care under Shu-Fen’s advisement who may just hold the answer to where her missing daughter is and who, or what, has her.

There is a lot to admire in director Cheng Wei-Hao’s follow up to his original hit: impressive production values, a committed cast, a sustained sense of dread and a narrative, for the most part, that expands on the deliciously creepy notion of a demon spirit luring victims to their demise in the forests of Taiwan. It may all be a little J-horror in style but the director crafts some great scares, establishes characters that the viewer cares about and even manages to create a sense of genuine loss and despair as families are inexplicably torn apart by a child ghost. The flick also authentically (at least seemingly so) showcases the concept of local mediums attempting to contact the spirit world to find out where the missing girl is which, coupled with a subtly unnerving soundtrack, helps to create a tense ghost story. The lead characters from the first instalment are also creatively re-introduced into the story helping to build the strange and scary mythology of the forest dwelling demons.

As mentioned the first hour is great but alas Cheng Wei-Hao can’t quite keep his assured hand up and unfortunately slips into full blown fantastical craziness and excessive CGI madness for the final stretch. While the imagination still flows (it’s quite a unique prospect to go full tilt and show the demons and spirits in all their glory) the budget doesn’t quite stretch to the CGI meaning the film ends more on an over-blown cartoon showdown compared the slow burn first hour. In addition, the filmmakers decide to explain too much of the mysterious ghost girl’s back story meaning the sense of mystery completely vanishes, thus the demon becomes less scary. It’s not a complete loss as the climax is certainly a thrilling pay-off but nowhere near as satisfying as the brilliant build-up.

Much more than a trashy quickie horror sequel (at least up until the last half hour) than many might be expecting, ‘The Tag-Along 2’ is an entertaining ghostly romp that when on form, expertly blends drama and frights.