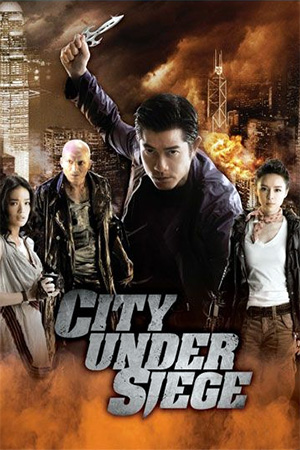 Nobody does Superhero films quite like Hollywood. Perhaps it’s the grand tradition of DC and Marvel or maybe it is just the bigger budgets, but comic book adaptations have been exalted beyond mere pulp cinema to be exciting, dramatic and important films. Nolan’s Batman films and Raimi’s ’Spiderman’ films have brought a new respect to an often derided format. When other countries try to compete, the results look a lot like ’City Under Siege’.

Bullied clown Sunny (Kwok) is desperate to be taken seriously in the travelling troop, but finds just derision and threats from strong man Cheung (Chou) and his motley cohorts. During a tour of Malaysia, the avaricious members of the circus hear about a bounty of Japanese gold hidden in underground caves since the World War II and, after eliminating the competition, stumble upon their target. Sunny is dragged along with them after learning of their nefarious actions, but before they can deal with him, all are overcome by chemicals also stored in the former base. The toxin, designed to create super-soldiers for Japan, infects the team and mutates them in a variety of ways, though Sunny manages to escape.

When these new super villains reach Hong Kong they do exactly what is expected of their kind, robbing and pillaging everything in sight. While their mutations continue, Sunny – who has been enriched with his own powers – avoids these after-effects and becomes a crime-fighting celebrity. A potential cure for the maledictions is evidently coursing through Sunny’s veins and Cheung is keen to utilise it no matter what the cost.

The good news is that ‘City Under Siege’ is not ‘Kung Fu Cyborg’. It’s a rudderless mess, true, but it is also a little more entertaining than it has any right to be. In a year of abominations like ‘Future X Cops’, that really has to count for something, however minute. Starting as quite a fun romp with a few watchable gimmicks along the way, ‘City Under Siege’ does get afflicted with the ‘poor second hour syndrome’ that other local blockbusters suffer from when they try to go beyond the requisite 100 minutes. Yet, after sitting through the aforementioned two attempts at an Asian super hero movie over the past 18 months, this reviewer is grateful for small mercies.

The skill of Hollywood’s best attempts at this sub-genre is to take the preposterous and make it human, easy for a mass audience to digest. It’s the juxtaposition of very human frailties with larger-than-life situations that makes a production like ‘Spiderman’ click. Or it’s the ability to create a far-fetched world with suffocating realism as with ’Dark Knight’. It wouldn’t be unkind to say that Benny Chan’s targets are not nearly as lofty and subsequently not as involving. The grand moments of drama lack resonance, copying the most one-dimensional ideas of the fantastic. ‘City Under Siege’ does become a monotonous procession of wirework action and oddball effects despite starting with moments of promise.

The first half hour implies that this might be a genuine attempt by Benny Chan to join the mass of directors of successful superhero franchises. Yet we’re never sure who has what power and why, rendering the hero interchangeable with the gradually mutating villain. ‘City Under Siege’ plods along to something of an anti-climax after nearly two hours, never achieving logical pacing or suspense. It’s such narrative basics that prove the story’s undoing and no amount of bland fight action or attractive cast members can do much to redeem it.