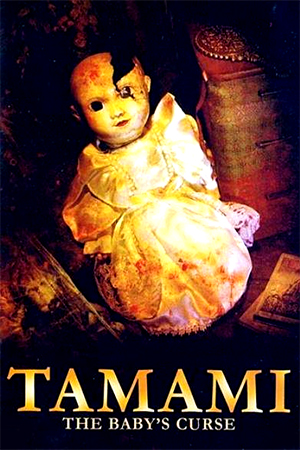 ‘Tamami: The Baby’s Curse’ is a silly but fun blend of Japanese gothic ghost horror and over-the-top gore and is perhaps the best mutant killer baby film to come along since, well, maybe ever. Yudai Yamaguchi, who also gave us equally mad films such as ‘Battlefield Baseball’ and ‘Meatball Machine’, injects ‘Tamami’ with a gleeful, gory sense of fun, a la pre-‘Lord of the Rings’ Peter Jackson, conjures up just enough spooky tense atmosphere and come the end, crams in enough Raimi-esque set-pieces to make the film a hugely enjoyable ride.

On a dark and stormy night, Yoko (Mizusawa) is returning home to be reunited with her real parents, the Nanjo’s. Living in almost seclusion out in the country in a massive, scary mansion (the first clue that everything might not be right with this family!), the Nanjo’s have not seen their daughter since she was small. Likewise Yoko is rather unsure about this family reunion but father Nanjo thinks it is for the best. Needless to say, all is not well at the mansion and on her first night Yoko is tormented and chased by an unseen force. A force that makes its way through the mansion’s air ducts, kills small animals for fun (and then deposits the dead carcasses on Yoko while she sleeps) and cackles maniacally, all the while remaining hidden. In addition, Mother Nanjo is madder than a bag of frogs, refuses to acknowledge Yoko’s existence and is enamoured with Yoko’s dead sister: the evil, giant handed, mutilated child running around the mansion causing rampant destruction. And cackling maniacally.

‘Tamami’ is the kind of film that will divide people straight down the middle: you will either love it or hate it. This is probably Yamaguchi’s most accomplished movie in terms of style but the movie has two distinct tones: low key tense one minute, over-the-top/set-piece gore heavy the next. Yamaguchi manages to keep it all just together (before the ridiculous explosion heavy finale) and to be fair, how serious and complex does one expect a movie about an over grown mutant baby to be? With its groovy 50’s gothic ghost vibe and sense of fun, ‘Tamami’ sets out to take the viewer on a ride and this it certainly achieves. One minute you will be jumping out of your seat as the you catch glimpses of the baby running around the mansion, the next howling with laughter as it’s flying through the air attacking someone and then smiling insanely at the ridiculously over-the-top gore scenes, that often come out of nowhere.

Yamaguchi certainly goes all out in his attempt to make ‘Tamami’ the ultimate killer baby movie and by all accounts he may just have succeeded. The earlier scenes involve a lot of tease, us viewers never really getting to see Tamami in all her glory. Come the halfway mark, all caution is thrown to the wind and Tamami is seen, at regular intervals, causing all kinds of havoc. The effects may not be the greatest and the CGI more dodgy than not, but this all adds to the low tech scare charm and Tamami is one ugly, creepy and strange creation. No real legs, one giant hand and with the ability to seemingly fly through the air makes her very adept at slaying the fully grown characters.

Some may be disappointed that the slow build vibe of the first half is replaced with the all out set-piece tone of the second (including an amazing bit with a broken guillotine used in a Pit and the Pendulum fashion) but on its own charmingly weird and over-the-top style, ‘Tamami: The Baby’s Curse’ is a horror hoot. It may not be as intensely gory as say ‘Machine Girl’ or ‘Tokyo Gore Police’ but it is still a delightfully mad slice of Japanese comic book horror.