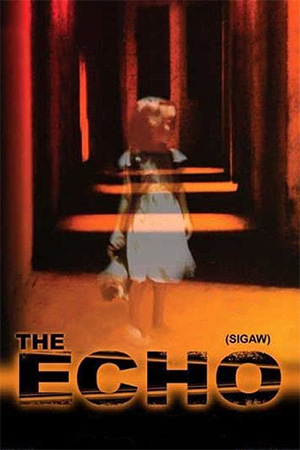 ‘The Echo’ won the Best Editing at the 2004 Metro Manila Film Festival: ironic as the film could use some drastic pruning.  Ten minutes shy of the two hour mark is too long for this ghost story from the Philippines.

Marvin (Gutierrez) and Pinky (Locsin) move into a dilapidated apartment block, unbeknownst to her father.  The domestic violence in a neighbouring apartment, involving a jealous policeman (Yllana) and his persecuted wife and daughter (Calzado and Guevara), grows increasingly distressing, until the building’s caretaker reveals the shocking truth.

Borrowing heavily from Nakata’s ‘Dark Water’ and Kubrick’s ‘The Shining’, Laranas’ ‘The Echo’ brings nothing new to the overcrowded Asian horror market.  Iglesias’ screenplay, based on a story by the director and himself, lacks sorely needed subplots and incidental detail, stretching what is a simple and predictable short film to unsustainable feature length.

Compensations come from Laranas’ own murky green cinematography and Albert Michael Idioma and Arnold Reodica’s sound design, although both ape the conventions of Asian horror and the liberal use of shock sound effects merely reveals the director’s inability to generate tension.