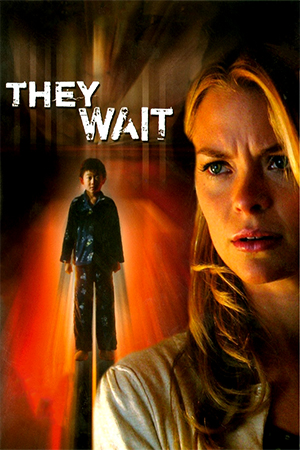 ‘They Wait’ is refreshingly low key, old school style ghost story that has no pretensions of being anything else and delivers a well told story and a number of impressive scare scenes: exactly what a good ghost story should do. Steeped in Chinese mythology, ‘They Wait’ tells the story of Sarah (King) an American woman who has married into a Chinese family. With her son Sam (Regan Oey) she is still trying to adapt to her new life when unexpectedly her husband is called back to the Pacific Northwest to attend the funeral of his beloved Uncle. The family return home for the funeral and stay at the deceased Uncle’s old residence. Upon arriving both Sarah and Sam begin to have strange visions and it seems Sam has been marked by denizens of the underworld. Fearing for the life of her child, Sarah sets out on a course to discover what is really going on delving into the strange and dangerous world of the dead Uncle’s past and Chinese spirit world.

First off, ‘They Wait’ is a good looking ghost flick, polished and well handled with some fine performances form the cast. Jamie King (‘Sin City’) runs the emotional gauntlet as a mother pushed to her limits as she tries to save her son. Starting off as a somewhat cold character we soon warm to her as the emotions and frustration she experiences are of a real mother. King gives it her all and adds an emotional depth to the all the ghostly goings on. Likewise, little Regan Oey who plays Sam is just as good, defying his young years and delivering a fine performance. This is no annoying movie brat. Director Eric Barnabash (‘Cube Zero’) has made a good looking movie that spends equal time on its characters as well as delivering some superior scary set pieces.

Rather than a remake of a hit Asian horror flick (see ‘The Ring’, ‘Dark Water’, ‘Shutter’ and about a million others) ‘They Wait’ is an original horror movie that uses Chinese mythology and culture as a basis to frame a story around rather than bastardize like so many of those aforementioned Western remakes. The film touches on Eastern folklore, such as returning the bones of the dead home, and uses it to tell a quality slice of genre storytelling. In addition, ‘They Wait’ delivers some jump-out-your-seat set pieces that have been missing from horror films of late. There is one scene early on in particular which is guaranteed to make you jump no matter how many of these types of films you have seen. And one of the most successful aspects of the film is that it plays it all straight: there is no tongue in cheek, no overuse of ambiguousness, this is all really happening and Sarah must do what she can in order to save her son and herself. After so many J-horror rips offs and ambiguous did-it-really-happen-or-not type horror flicks it’s refreshing to see a flick that is proud to be a ghost film and deliver the scares.

A little gem of a film, ‘They Wait’ is a successful and, most importantly, highly entertaining fusion of Eastern ghost folklore and Western storytelling. It’s only downfall being that it wastes the great Michael Beihn in a brief and thankless role. Otherwise this is short, sharp and scary fun.