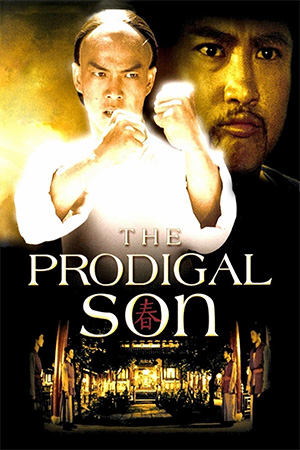 Yuen Biao plays the title role as spoilt rich kid Leung Chang whose parents pay any potential challenger to lose in order for him to remain unhurt. That is until Chinese Opera player Leung Yee Tai (Lam Ching Ying) refuses the money, beats him up and proceeds to explain how bad his Kung fu really is. The story follows Biao in his attempts to become an apprentice to Yee Tai and showcases some exquisitely choreographed fights and Wing Chun training sequences.

The character of Leung Chang sometimes known as Leung Jarn is a real Chinese historical figure, famous for being a Wing Chun master. He was also portrayed a couple of years earlier in the Sammo Hung directed ‘Warriors Two’.

Lam Ching Ying is a revelation in this film. Having studied Chinese Opera under Madam Fan Fok Fa (a rival school to that of Sammo and Jackie’s run by Sifu Yu Jim Yuen) and famous for portraying female characters in the real opera, while being a true Wing Chun practitioner, steals the show with the best acting and action throughout. If you enjoy his performance, then check out ‘Mr. Vampire’ and ‘Magic Cop’.

This film is a true classic, outdoing other period pieces ‘Drunken Master’ and ‘Once Upon a Time in China’. Go get it!