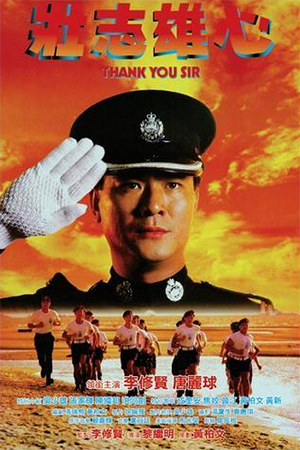 Focusing on the now-defunct ‘Royal Hong Kong Police Cadet School’, ‘Thank You, Sir’ centres on the final group of trainees as they go through the rigorous course. Lee (Danny Lee), a high ranking officer awaiting a prominent promotion in England, is asked to take charge of the school as a stop-gap before his big assignment. Though Lee is unaccustomed to the system, his radical, human approach to teaching the young cadets is happily accepted by some and angrily resisted by others. Two trainees who appreciate Lee’s caring style are Cheung (Nick Cheung) and Wong, eager cadets who are both faced with personal complications. While Cheung’s doting mother has made it difficult for her son to be independent, Wong faces the constant belittling of his unappreciative father (Shing Fui On). As the two become good friends, the various pressures of the training and the sometimes brutal nature of the superiors take their toll. Nevertheless, both of them overcome their obstacles and eventually reach the apex of their training: the illustrious graduation.

Though ‘Thank You, Sir’ shouldn’t work, it actually does. Despite a storyline that is as old as the hills, there’s something refreshingly simple about the execution of Ivan Lai’s version of events. Every cliché that is expected turns up; from the personal tribulations, to the bullying house officer and the emotional graduation, ‘Thank You, Sir’ could so easily have been stale and routine. However, director Lai manages to turn moments of pure melodrama into scenes that have their own dramatic integrity. Though Lai’s handling of the story is capable verging on the accomplished, the performances of a mostly b-list cast are the film’s real foundation. While Danny Lee’s image is emblazoned on the front of the DVD, it’s younger actors such as the now-popular Nick Cheung that give ‘Thank You, Sir’ its hook. Even when Lee does take centre stage he gives the film a dose of his screen presence; after all, in a film focusing on a police cadet school, what better actor to have filling in the cracks than Hong Kong cinema’s foremost cop.

The simple goals of the film will not wash with everyone though. There are no fireworks or surprises, the problems are all solved by the end of the film and there is a happy ending for everyone. Of course, such a conventionally story is unlikely to turn out any other way. However, though it may be undemanding fluff, it’s entertaining of its kind – there are far more self-important works that are far less successful in this area. It’s not a hidden gem, but ‘Thank You, Sir’ is a worthwhile purchase for those who are interested by the premise.