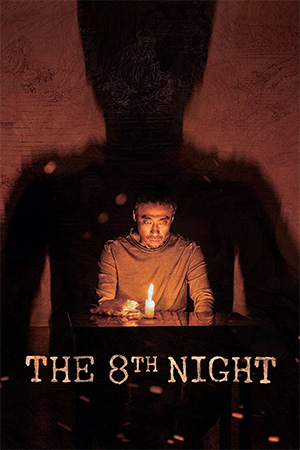 Spooky Korean thriller that sees a once devout monk and renowned exorcist (Lee Sung-Min) brought out of hiding by a kindly young monk (Nam Da-Reum) who needs his help in thwarting an ancient demon that is possessing people in order to return to earth and wreak havoc. The two form an unlikely duo but come to care for and respect one another as they race across the city to put a stop to the rampaging demon once and for all.

For two thirds of its running time, ‘The 8th Night’ is a satisfyingly low key supernatural thriller that explores themes of shamanism, redemption and even friendship as the two monks grapple with a dangerous evil. The relationship between the monks is the core of the film, their budding friendship giving heart to proceedings, along with the younger monk’s reintroduction into the modern world providing some welcome gentle fish-out-of-water levity (his joy at getting new sneakers causing him to break his years long vow of silence is particularly charming!). There is also a sub-plot about a cop on their tail as he tries to piece together all the random possessions and killing across the city. Director and writer Kim Tae-Hyung infuses events with a subtle approach and oodles of eerie atmosphere making some of the generic shocks hit harder. He goes for spooks and a sense of desperation rather than lots of gore, giving the film a more mature vibe and a genuine sense of the weird.

This may disappoint some expecting something gorier (though there are a few bloody shocks!) and fight packed, especially as the film is being sold as a monk who takes up arms with his trusty prayer beads and axe to fight demons: hinting he will be hunting them down in violent fashion. While he does use said instruments and there are a couple of confrontations, ‘The 8th Night’ is far from and much more than the concept of a bad ass monk taking on demons with an axe. While that is a great concept, it’s a different kind of film and ‘The 8th Night’ is a classier affair with subtle scares rather than violent action.

At least it is until the final third! Unfortunately, the payoff to what has come before is not as satisfying, the moody tension slipping due to some unnecessary convolution and a reliance on well-worn tropes: mainly a surfeit of shoddy CGI back smoke to represent evil/demons. While it doesn’t undo all the good work of the previous two thirds, the finale unfortunately succumbs to cliché and contrivance meaning ‘The 8th Night’ doesn’t quite end with the bang it should. Nevertheless, this is still an enjoyable occult thriller with solid characters and a mostly moody atmosphere and should sate fans of serious horror.