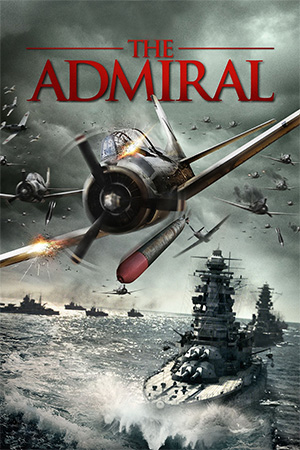 ‘The Admiral’ tells the story of one of the few Japanese to actually oppose the attack on Pearl Harbour: Admiral Yamamoto. A respected navy officer, he commanded the fleet of carriers that set sail for Pearl Harbour, the carriers that sent planes to bomb the harbour that fateful morning during World War 2. Against the idea of a surprise attack and wary of Japan making enemies with a nation as powerful as the USA, Yamamoto found himself at the helm of one of the biggest military mistakes in history. The film plays tribute to the man, an officer of great tactical skill at sea who was becoming increasingly at odds with his nation’s army but was bound by duty to follow orders no matter how much he opposed them.

As well as taking in the battle of Pearl Harbour, the film explores the battles Yamamoto had to lead following that attack, as the Japanese try desperately to capture Hawaii in an effort to strike against the USA. The film also looks at Yamamoto the man: a man who seems at polar opposites with his navy and military brothers. Intelligent, softly spoken but able to command authority, a devout family and a passionate connoisseur of food (of all varieties), Yamamoto is seen as a man who would perhaps rather be at home with his family or at his local restaurant trying a new dish, rather than out at sea.  Yet, due to his gift for being an expert navy fleet leader and his duty to his men and commanders, Yamamoto is thrust into battle. It’s an interesting tale (perhaps embellished for this film?) as a man who seems to command respect and display intelligence is duty bound (forced?) to perform some incredible military blunders. In addition we see the men he inspires (including a young, plucky reporter back on dry land) and how the Japanese military decisions crown him a hero back home despite the great loss of life out at sea.

‘The Admiral’ is much more a character piece than all out epic war film. There are scenes of combat but they are limited and unfortunately use sub par CGI to show jets fighting in the air, aircraft carriers out at sea and the destruction of Pearl Harbour. The attack of Pearl Harbour is somewhat low key compared to the bombastic, in your face, though technically brilliant and epically sustained, attack in Michael Bay’s ‘Pearl Harbour’. Most of the battle is seen from afar and is over quickly but this is not to say there isn’t an emotional punch to it. The scenes following the attack as Yamamoto and his men learn they have made a mistake and if they had just waited a little longer before attacking they may have been able to avoid this mess, help to convey the uselessness soldiers out at sea regularly felt as often the wrong decisions were made by officials far away on dry land.

Koji Yakusho (‘13 Assassins’) as Admiral Yamamoto is a real standout perfectly conveying what a conflicted but honourable man Yamamoto was: a man as at ease commanding a fleet of gigantic armed ships as he was enjoying a quiet meal in a restaurant or with his family. ‘The Admiral’ is a beautifully filmed and naturally acted study of war that does unfortunately sometimes feel a bit like a TV movie. This is perhaps due to the unrushed pace and the emphasis on talky negotiations rather than bombastic war action. Not that this necessarily hinders the film in anyway as ‘The Admiral’ is often thrilling and stirring, if a little over stretched on the running time, and it’s refreshing to see a war film not just rely on lots of huge battles scenes for entertainment.