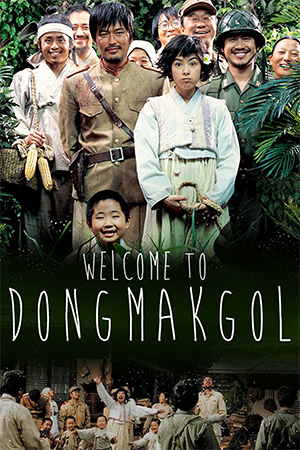 I must confess that, despite being widely loved since its release, ‘Welcome To Dongmakgol’ has sat on my shelf for a few years now, awaiting the time when I felt impelled to see what the hype was all about. In between it’s release and my viewing, a scathing review has appeared in ‘The Times’ (giving it one star out of five!) with accusations that it is ‘syrupy’ and ‘sentimental’ to the extreme – warning signs for a very minor reviewer like me from an esteemed newspaper.

As the Korean War rages on, two small groups of soldiers from either side become stranded in the countryside. The North Korean trio, led by stoic Chief Comrade Lee Su-Hwa (Jung Jae-Young), happen upon a hopelessly naïve, slightly ditzy young woman who is picking flowers in a forest and tells them to follow her to a nearby village. When they arrive at this isolated location – far away from the intrigues of the civil war – they find two South Korean soldiers there, led to the same village of Dongmakgol by another innocent forager. A tense stand-off between the hated rivals begins with the villagers looking on in utter bemusement. They eventually agree to a truce when their actions end up destroying the food store for the entire population and they feel inclined to payback the kindness show to them.

Meanwhile also recovering in Dongmakgol is an injured American pilot who is being nursed back to health by the eccentric locals. Despite the language barrier, he too finds himself falling under the spell of the village and the truce between the Allied and North Korean contingent turns to friendship. But the war rages on far below Dongmakgol and the absurdities, savageries and bloodshed threaten to engulf it as the pilot’s division – thinking he has been captured – mount a trigger-happy rescue mission to get him back.

‘Welcome To Dongmakgol’ is one of the great anti-war films. It’s as simple as that. Witty, moving and, most important of all considering its intentions, scathing without jaundiced polemic, this is a remarkable film. And, as with all of the finest works of this kind, the viewer doesn’t need specific knowledge of the politics of the Korean War; its commentary on the absurdity and needless savagery of conflict is a universal theme as relevant in Europe and Africa as it is in its home territory. Reminiscent of the excellent Serbian war satire ‘No Man’s Land’, ‘Welcome To Dongmakgol’ is arguably better realised despite its larger-than-life characterisations.

There’s always a danger that the eccentricities begin to cloud the mordant bite, but Park Kwang-Hyun achieves a balance with scientific precision. Though the Dongmakgolians have an ethereal innocence that is heavily played upon on, the juxtaposition with the unflinching violence that punctuates the film achieves a masterful synergy. Anyway, the child-like purity of the villagers is merely intended as a tool to draw out the main sextet of protagonists, highlight the humanity of ordinary people who are forced into unthinkable actions.

I’ve often found myself criticising many Korean movies for needlessly bloated running times, but great films – and make no mistake this is one – are impossible to shackle to particular durations: they just move along Sylph-like carrying the enraptured viewer along with them. At over two hours ‘Welcome To Dongmakgol’ allows well-written characters with nuances and neuroses to grow, enabling the climax to have an utterly unforgettable impact. The cast plays with the material beautifully, Korean screen legend Jung Jae-Young standing out in particular but never overshadowing his contemporaries. Special mention should go to Steve Taschler who is more than just the token Westerner of the piece – many reviewers seem to have been unnecessarily harsh regarding Taschler and his countrymen though this is a view I simply cannot share.

Making a ‘war is bad’ film is easy. Making something that cuts to the very marrow of the subject in a balanced way and then tackles the essence of humanity is a very much harder task. The fact that ‘Welcome To Dongmakgol’ was made in a country still in the throes of a cold war with its Northern neighbour just cements the point astutely. Though I am a wannabe wordsmith of no repute, I have to say that the referenced ‘Times’ review is verging on the egregious – war is a subject that by its very nature is bound to be sentimental and emotional, something that is so sadly entwined with civilisation. Nevertheless, make your own mind up, but whichever review you instinctively side with, just watch ‘Welcome To Dongmakgol’.