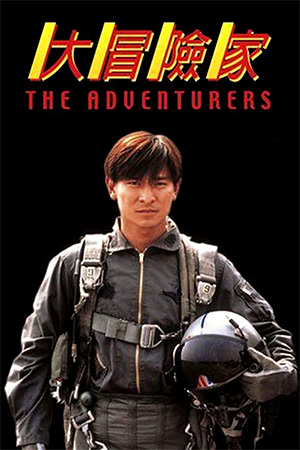 A wishy-washy mish-mash of melodrama and action, renowned Hong Kong director Ringo Lam just couldn’t get the tone quite right for his mid-90s opus ‘The Adventurers’. The helmer of such acclaimed flicks as ‘City on Fire’, ‘Burning Paradise’ and the incredible ‘Full Contact’, turns his hand to a romantic(ish) adventure that spans 3 countries, 20 years and the most improbable love triangle. Andy Lau is Wai Lok-yan who witnesses the slaying of his parents by the evil Ray Lui (Paul Chun) in 1970s Cambodia. Scarred for life, he is raised by his Uncle Shang (David Chiang) and becomes a top pilot and soldier himself. Still wanting revenge he concocts a plan to kill the now aged Lui but proceedings don’t go according to plan: Wai’s best friend is killed, Lui is still alive and Wai flees the country, holing up in San Francisco. Working on a tip he discovers Lui’s estranged daughter is living in the city and snatches her. However, the two bond and Wai sees an opportunity to infiltrate Lui’s family and empire so as to get closer to the man who killed his parents and extract his revenge.

Now Ringo Lam is one of Hong Kong’s most striking filmmakers. Films like ‘Burning Paradise’ and ‘Full Contact’ still hold up today and showcase his dark and gritty style to full effect. ‘The Adventurers’, while still somewhat dark in tone, is one of his less successful ventures. At the time of release in its native Hong Kong there was more press around the fact that star Andy Lau commanded a huge salary of over $1 million (a record at the time for a Hong Kong star). This reputedly affected the budget and production of the film which, while it has some spectacular set pieces and regular globe trotting, is a muddled, slow and un-involving affair. The pace never really ignites, Lau is un-engaging and makes for a rather selfish and uncaring hero, the romantic triangle between him Chien-lien Wu (who plays Lui’s daughter) and Rosamund Kwan (playing Lui’s mistress) is so ridiculous and unnecessary, with a good portion of the film taken up with it. There is no real chemistry with the leads and it just drags the film into turgid melodrama. Lam is also known for his action skills and while there are some impressive set pieces (a raid on Lau’s San Francisco hideout, the helicopter chase/explosion heavy finale) its not enough to save the film from being a bit of a drag.

Lam’s like of ultra violence is still very much evident, carnage and killing shown in graphic detail, often sitting unwell alongside the drama aspects of the picture. If the style, tone and narrative aren’t successful what ‘The Adventurers’ does have is some amazing photography (courtesy of Arthur Wong and Ardy Lam) the film always looking stunning when in Cambodia, Hong Kong or San Francisco: Lam getting the most of his locations. The scope is pretty big for the film and it has a nice international flavour to it.

While it’s impressive that Lam has attempted to make a dark and edgy country hopping adventure, certain factors just drag it down, making ‘The Adventurers’ a case of “what could have been” if all the elements had come together. But a lack of focus on narrative, momentum and Lau’s ho-hum performance, mean this isn’t quite the adventure it should have been. Some good sequences punctuated by many tedious ones. Shame.