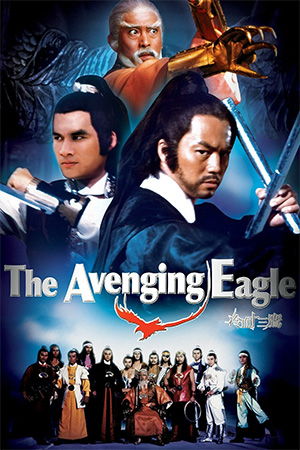 Stumbling through the wilderness and near to death, desperate warrior Chi (Lung) collapses to the ground only to be aided by a well-dressed traveller (Fu Sheng). After a brief skirmish between the two, Chi thanks the stranger and tells him his story and why he has reached such a state…

Chi explains that he is an escaping member of the dreaded Eagle bandit clan who terrorise the innocent throughout the land and live off the profits of their evil crimes. Having been adopted as an orphan by the chief (Ku Feng) along with scores of other innocent children, the child is put through cruel and rigorous training that sees most of the students killed. By the end of this discipline the surviving boys are fully-fledged Eagles and have had all of their human emotions stripped away. Missions and killings are now a frequent part of Chi’s life and his only instinct or loyalty is towards his powerful foster father. All of this changes when the clan are sent out to raid the spoils of a heavily armed group and Chi is seriously injured in the process. Thankfully he is found in the forest and nurtured back to health by a kindly family who reawaken Chi’s deeply buried feelings. Although he returns to his clan headquarters, the introspective killer cannot forget the kindness shown to him. Unfortunately a twist means that the Eagles’ next target is the very same family who are now so dear to Chi; the consequences mean that he must decide which side to stand on and the eventual confrontation sees Chi barely escape, now on the run as the Eagles’ latest potential victim.

The stranger swears allegiance to Chi’s cause and helps him plot the downfall of the Eagle Clan. However, what are the real motives of this new ally and why is he so eager to take on these notorious bandits?

The ‘killer seeking redemption’ plotline is a well recycled one in Hong Kong with a whole brood of films using it as the basis of the central drama. John Woo’s ‘The Killer’ is perhaps the most famous example of the familiar narrative, while ‘The 13 Cold-Blooded Eagles’ (a virtual remake of ‘The Avenging Eagle’) showed how low-budget new-wave flicks were using it. However, ‘Avenging Eagle’ stands out as one of the first and one of the very best of this crowded company. In a manner that was to be expected from a director of such promise as Sun Chung, this is a mature kung-fu drama that is light-years ahead of most critics’ perception of this misunderstood genre. Filled with an ominous mixture of brotherhood and pessimism, Chung’s expertly shaped film provides three-dimensional characters alongside an absorbing plot. In fact so strong is ‘The Avenging Eagle’ in cinematic areas that the main flaw is actually the fight action; although certainly enjoyable, it doesn’t have the energy or invention that the very best Shaw brothers’ films contain. Importantly though, the three main members of the cast give electric dramatic performances that make the viewer forget any possible weakness in the action. Ti Lung has rarely been better than in his role as Chi and the inner-conflict that he naturally encounters is flawlessly captured. Meanwhile Fu Sheng is charming, yet enigmatic as the supporting lead and Ku Feng provides a suitably wicked foe for the pair. Within all of these performances, the quality and almost lyrical script by Ni Kuang is very much in evidence. This is a kung-fu film with enough substance and genuine quality to please even the most demanding or cynical movie fan – an assured recommendation.