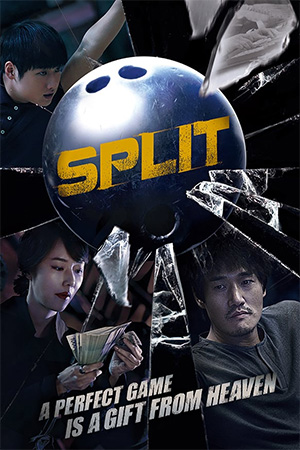 Professional bowler Chul-Jong is at the height of his pomp and fame when a car accident leaves his life in ruins. As the years pass, Chul makes ends meet by bowling against various challengers for cash, a hand-to-mouth existence that brings him to the attention of indebted alley owner Hee-Jin. The two take on increasingly bigger rivals, but as the money increases so does the danger and Chul finds himself face-to-face with an old enemy. Yet hope comes in the form of a young autistic bowling prodigy who Chul decides to take under his wing and protect from the same pitfalls the former professional fell prey to.

Though there have been plenty of sports movies through the years, there haven’t been too many about bowling and there’s been even fewer Korean bowling films. Yet sports movies tend to be about universal themes that mean that the actual pastime on offer is less important than the human journey. ‘Split’ is the usual story of missed opportunities, redemption and a winner-take-all finale shot in slo-mo, but familiarity with its execution is not necessarily a bad thing.

The best films of this niche genre give the audience characters to care about and ‘Split’ has three appealing protagonists to root for. There’s the usual washed-up veteran who is given ‘one last chance’ (effectively played by Yoo Ji-Tae), the feisty sidekick who gives him hope and, most interestingly on this occasion, the autistic savant. It’s a predictable mix yet thanks to solid writing and the efforts of the actors involved it somehow works.

‘Split’ loses marks for lack of originality though; it’s simply too formulaic to be anything extraordinary. It would take something quite exceptional to take such cliched elements and make them stand out from the crowd and while it’s an enjoyable feel-good film it’s not the kind of the production that leaves much of a lasting impression.