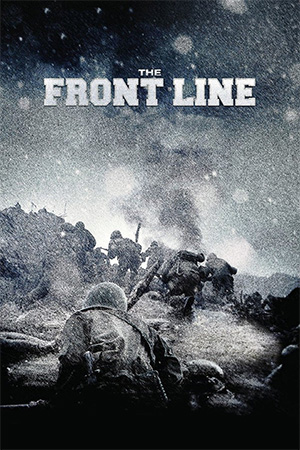 Epic, good looking and involving war flick from Korea, ‘The Front Line’ thankfully plays down the melodrama and nationalistic tendencies a lot of other big budget Eastern war epics favour to instead concentrate on the characters and how they deal with the awful situation they have found themselves in. Beautifully shot and impeccably well made, director Jang Hun (‘Rough Cut’) creates a film that features all the impressively staged war combat you could want but crafts a film much more about a group of soldiers who we get to know and see how they each deal with the war, in between all the big scale combat scenes.

Set towards the end of the Korean War, North and South Korea battle over the territory of the Aerok Hills, a strategic strongpoint both sides want to control and an area both have won and lost countless times. The South Korean Alligator company have been out there fighting for some time, desperately trying to keep control of the strongpoint, when suspicions of treachery and siding with the enemy arise. War weary intelligence officer Eun-pyo (Shin Ha-Kyun) is sent to investigate and what he discovers will ultimately change him as a desperate group of men, all shell shocked in their own way, fight to stay alive in the dying days of war.

Wisely building to the big combat scenes, ‘The Front Line’ lets us, the viewer, get to know the characters and watch them transform through their actions and what they must go through to survive. Hard hitting but never gratuitous, the film (as mentioned) is much more about the men of war and how they cope between the outbreaks of combat. The cast are superb with stereotypes mercifully kept to a minimum (save for a shouty general type and the wet-behind-the-ears newbie) and they all get a chance to shine as the various characters are put through their paces emotionally and physically as the war changes them in a variety of ways. While the film mainly focuses on the South Korean army some time is spent with the North Korean soldiers, often showing them to be just as scared, confused and shell shocked as their enemies. This gives proceedings a more balanced feel and the subplot about the two sides burying a crate of “treats” in a bunker for the other side to discover and enjoy (each time the control of the hill is taken) is a nice touch also.

The combat is suitably impressive and realistic, and often hard hitting as the two sides constantly battle the front line. Epic and sweeping in nature the battles are incredibly well shot including some taught and tight sniper action and an impressive, not to mention scary, night time battle in the rain where the soldiers can only rely on flares for light and sight. The makers don’t shy away from the horrors of war either with various characters forced to do unspeakable things in order to survive. This gives the film an emotional wallop and the director never shies away from the often pointlessness of war, not least in the devastating finale where both sides are forced to do the downright unthinkable.

Beautifully shot, impeccably well made and managing to balance character and war action with aplomb, ‘The Front Line’ is a classy war film all round and deserves to be ranked alongside the likes of other great Eastern war films, ‘Brotherhood’ and ‘Assembly’.