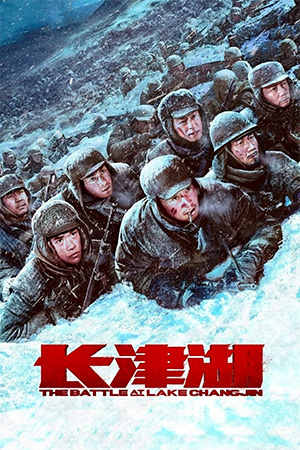 Mega blockbuster war film, ‘The Battle At Lake Changjin’ is one of China’s highest-grossing movies, a sprawling epic, a jingoistic smack in the face, and when it cuts loose, a thrilling action movie. The film tells the story of an important battle during the second phase of the Korean war where the Chinese People’s Volunteer Army fought and pushed back the encroaching American forces. Part men on a mission movie (as the PVA travels to the strategic point of Lake Changjin, facing many hardships along the way) and part giant battle movie, the film puts all its money (and the talent of its many big-name directors) on the screen to deliver a bombastic war epic.

With A-list directors such as Tsui Hark, Dante Lam and Chen Kaige on the roster (along with several other directors!) it’s hard to tell who helmed what (though when all the expertly staged action erupts one can’t help but feel that is Hark and Lam’s influence!) the film is amazingly cohesive for the most part and looks incredible. Mixing a huge cast of extras, massive sets and practical effects, along with oodles of (mostly) impressive CGI, the film has a pleasing mix of blockbuster sheen and well-crafted period detail. At just shy of three hours, the film rarely drags (despite melodramatics attempting to derail proceedings on occasion!) with the runtime allowing for character and story to be lain and a perilous journey across harsh elements to be told before the infamous battle erupts. Nothing is rushed (save for the introduction of endless Chinese and American army personnel at the beginning who are introduced in that blink-and-you’ll-miss-it name-and-titles-shown-on-screen-fashion that seems to be favoured by Chinese blockbuster war epics!) but the pace moves pleasingly along, ample time given to both story and action.

The trio of famous directors aren’t the only big names on board as lead duties fall to Wu Jing, seemingly the go-to guy for massive Chinese blockbusters (‘Wolf Warrior 2’, ‘The Wandering Earth’, ‘The Climbers’), who leads the charge as the ever courageous and here to defend his country no matter what, Wu Qianli. There’s also a subplot featuring him and his brother (Jackson Yee) who has tagged along to join the PVA, so we have that human/family element in amongst all the bombast and action. This does lead to some mawkish/gee-whizz moments that don’t help the overly jingoistic nature of proceedings which will no doubt irk many. There’s certainly propaganda in abundance here and while this may not be much different from say any Hollywood war-themed blockbuster it does wear one out somewhat and distracts from the thrilling nature and technical aspects of the film. Still, if one cannot allow it to overshadow the entertaining and well-made aspects of ‘The Battle At Lake Changjin’, then there is a slick and entertaining war movie to be found.

The action, as one would expect from the directors at the helm, is incredible and captures the fierce ferocity of large-scale combat. Not least a thrillingly kinetic set-piece at about the halfway mark when Wu Jing and a selection of his men must help take out an American outpost with an important communications tower. Blistering firepower and combat are expertly staged in what must be pushing thirty straight minutes of action, and mercifully the majority is all done practically. No posing, no flights of fancy, and save for a couple of moments of de-rigour slow motion, it’s a brutal exchange of gunplay and fighting that shows both the grim violence of war and the kinetic action chops of the directors.

Certainly not subtle (all the American characters are rendered like cartoon characters with cringe-inducing dialogue!!) but if you can forgive its flaws and instead bask in its blockbuster credentials, then ‘The Battle At Lake Changjin’ delivers some spectacular war movie action.

Trinity CineAsia are bringing ‘The Battle at Lake Changjin’ to Blu-ray, DVD and Digital from May 16, 2022. You can pre-order it now from Amazon.co.uk.