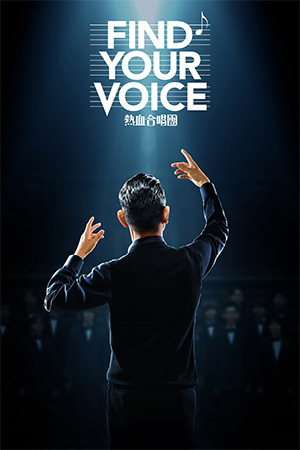 ‘Little Big Master’ director Adrian Kwan returns with another story of an inspirational tutor working with a class of under-privileged children. But, whereas ‘Little Big Master’ was based on a true story, ‘Find Your Voice’ is an ‘original’ work (parentheses intended!).

Acclaimed conductor Joseph Yim has spent years honing his craft abroad, yet is invited back to Hong Kong to take part in an intriguing experiment: to train a group of disadvantaged children to take part in a national choir competition. The varied students – who include a troubled youth from a violent household, a pre-teen stealing to support his family and a cosplay obsessed teenager looking for an escape from her miserable domestic life – are brought together and initially bristle against the new discipline. However, Yim begins to win the children over while their own struggles help him with his own shot at redemption after leaving the US due to some unknown disgrace. Yet the school authorities are watching closely and when his unorthodox style and students begin to disrupt the norm, there are calls to shut down the programme.

Adrian Kwan, once described as Hong Kong’s most earnest film-maker, scored a notable hit with ‘Little Big Master’, a film that showed how the devotion of one good teacher can transform children’s lives. Based on a true story, it wasn’t shy of pushing a few emotional buttons, but how could it not given the remarkable source material. Importantly, it was a moving and often beautiful film that, while sentimental (and that’s not necessarily a bad thing) it worked as a story and a journey. While ‘Find Your Voice’ goes for the same emboldening spirit, it feels as if Kwan has not just pushed a few buttons to get a reaction but brought out the full Moog synth and is playing it at its highest pitch.

The story, in itself, is pleasant even if we have seen this hundreds of times before; the ‘inspirational teacher/coach/professor trope is very well trodden cinematically. You know what you expect, you know that the frosty students and/or teacher will warm to each other by the end and you know lives will be changed. So how to make it fresh and new? That might be impossible given our familiarity with the theme, but it can be nuanced. And that, unfortunately, is just what ‘Find Your Voice isn’t; it’s enjoyable and pleasant enough, but one certainly couldn’t claim it’s nuanced.

Every box is ticked when it comes to the ‘troubled student’ brief and you undoubtedly feel you’ve seen the characters before. That said, the young cast acquit themselves well and you’d have to have a heart of stone not to be slightly moved by it all. That, though, is the problem. There is inherent pathos in the story, but the execution is so heavy-handed that it almost works against it. The over-bearing piano soundtrack combines with scenes that are embarrassingly lachrymose, creating a suffocating effect overall. It’s good to see Hong Kong actor/composer Lowell Lo again, and Andy Lau is always charming (just ask my wife who I had to give a sharp push to mid-swoon). Nevertheless, ‘Find Your Voice’ is as subtle as a hammer to the kneecaps.