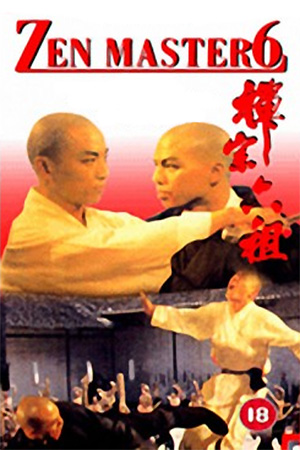 Shaw Brothers’ legend Lo Lieh was a prolific star, but much less prolific as a director. The most noteworthy entry into his filmography behind the lens was the splendid ‘Clan Of The White Lotus’ (which he also starred in). However, his penultimate feature as a director was Chinese-financed martial arts film ‘Zen Master 6’, a picture that has pretty much disappeared into obscurity since its release.

Wai Nam, a young boy who is the only survivor in a robbery that massacres his family, is taken to Shaolin Temple by the elderly housekeeper. Here he grows up and becomes adept in martial arts, but incurs the wrath of ambitious fellow disciple San Sau. When the ailing abbot decides to name a successor (who will be name the sixth Zen Master, hence the title), San Sau and his cronies believe he is the natural choice, so when Wai Nam is chosen the tension in the temple is palpable. Wai Nam leaves the temple to seek enlightenment before accepting the role of abbot, but San Sau is keen to make sure that he never returns and the sign of temple authority is handed over to him.

Clearly a Chinese production utilising Hong Kong talent, ‘Zen Master 6’ must have seemed out of place in 1987 when it was released. While action cinema had moved on to the modern day style championed by Jackie Chan, Sammo Hung and many others, Lo Lieh’s film must have seemed almost antiquated in comparison. This might have explained why it disappeared from the public consciousness and became a cult curio in the West while drifting into anonymity in its native land. Too early for the post-‘Once Upon A Time In China’ boom and too late for the post-‘Shaolin Temple’ frenzy in 1981, ‘Zen Master 6’ is perhaps better appreciated all of these years later. Perhaps…

When watching ‘Zen Master 6’ I kept wondering if the version I saw was edited down from a much longer cut. There are moments when the plot changes so drastically that it almost appears if you’re watching a different film: there isn’t a transition between shaven-headed hero to long-haired traveller, it just kind of happens; then the hero manages to acquire two new friends who thank him for helping them in some unseen moment. It’s a baffling experience and means that getting kind of emotional connection to the film is almost impossible. The genre is often derided for weak storylines, but ‘Zen Master 6’ takes this to a new level.

However distracting this is – and it really is – there is some redemption offered by the fight action. There isn’t an abundance of it, but when it comes it truly delivers. The final confrontation is particularly good, a mix of early Jet Li style acrobatic Wu Shu and Hong Kong action of the time. One only has to look at the credits to see why the choreography is so good – Yuen Bun and Stanley Tong are both credited as having a hand in the fisticuffs. It’s a shame, therefore, that this is such a discombobulated mess – whether it is the fault of director, editor or producer is difficult to know. Still, there are moments that make this Curate’s Egg worth nibbling on.