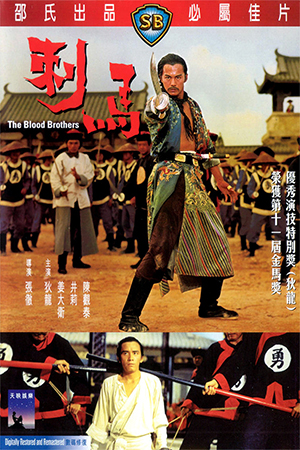 You’re reading a review of Chang Cheh’s ‘The Blood Brothers’, written by someone who, to date, has only seen 5 Shaw Brother’s productions from the 60s/70s. Since my introduction to Hong Kong cinema 7 years ago, I’ve been more than tempted to explore this genre and era of filmmaking. Seeing the beautiful widescreen trailers on several of the UK video label Made In Hong Kong’s releases didn’t do much to lessen my temptation. In particular, it was the trailer for ‘The Blood Brothers’ that struck a chord with me, mainly because I recognized Ti Lung as one of the lead actors. He was very much part of my introduction to Hong Kong cinema and his terrific performance in ‘A Better Tomorrow’ will always be special to me (although I think ‘People’s Hero’ is Ti Lung’s finest acting hour post Shaw’s). Back then I did say to myself that if I ever sit down and watch a Shaw Brother’s movie, it should be in widescreen, original language (in this case Mandarin) and subtitles, even if it means waiting years. Finally, at the end of 2002, IVL/Celestial released the first batch of their restored Shaw Brother’s movies on DVD.

Looking back at it, I think it was a good choice to instead choose ‘The Heroic Ones’ as my first movie directed by Chang Cheh. I was actually mighty impressed by everything from the scope of the production to the action choreography (the aforementioned Ti Lung has a terrific long battle in this). When talking to fans and reading reviews, everyone agreed that this was only Chang Cheh in early stages of development. Over the years he would fine tune aspects such as character portrayal, camerawork and action. I also began hearing people drawing parallels or comparing ‘The Blood Brothers’ to John Woo’s masterpiece ‘Bullet In The Head’. What similarities existed I didn’t want to find out by watching this movie dubbed into English but that there were similarities didn’t seem at all impossible since John worked as an assistant director on this and other Chang Cheh films.

Based on events that took place towards the end of the Ching Dynasty where General Ma Hsin I (Ti Lung) was assassinated by Chang Wen Hsiang (David Chiang), one of his closest men. In the movie we see Chang being captured and before the court he begins telling the story of what tore three blood brothers apart…

What matters most? Loyalty towards sworn brothers or would you favour the opportunity to gain great success and fame when fighting for your country? Certainly a theme close to the mentioned ‘Bullet In The Head’ and it’s very true for ‘The Blood Brothers’ as well. Not simply copying by Woo though because he made his own tragic, powerful tale influenced by working under the late director. Chang Cheh’s movie didn’t blow me away but it would perhaps if it had been an early Hong Kong movie experience. He takes on the challenge of keeping the audiences attention despite them knowing the outcome of main events from the very first frames.

Looking at this 30 year old movie, it’s no wonder you do recognise story structure and other familiar elements. No matter how old a film is, one thing that can separate it from similar ones is the execution of familiar elements. The right execution can even bring more greatness than originality. Very true for Chang Cheh’s film and he brings us a superbly paced martial arts drama with great attention to storytelling. Off the bat he makes sure we can expect the frame to be filled with Shaw Brothers trademarks such as huge battle scenes and extravagant sets. At the same time, Chang does not forget that it’s a smaller story of four people at it’s core. Each with different characteristics and each given good development by veteran Shaw Brothers screenwriter I Kuang and Chang Cheh himself. As the tension grows between characters, the action is executed with that set darker mood. That way, in my view, the not truly memorable action choreography (by Lau Kar Leung and Tong Gaai) becomes a very strong storytelling aspect as well. I’ve taken into account the films production year (1973), in other words I expect the martial arts to be less fast and furious. Still from the top, the feeling I got from the fights were that of being slightly stagy and stiff. However several longer parts of the choreography take place in one shot and the camera even switches position to another part of the set piece during it, something I’m always impressed by. The small weapons fight between Ti Lung and Chen Kuan Tai ranks as a highlight plus a later fight with Chen becomes very hard hitting because of what it has to do with a crucial event in the plot.

Occasionally Chang brings us back to the courtroom scene for short segments in between each layer of Chang’s story. These gives the audience a moment to absorb the very easy to follow plot but I thought these scenes worked tremendously well when looking at David Chiang’s character. His face, at times, becomes filled with hate when looking back at the pain he’s had to endure and there’s a sense of dread slowly creeping into the tale as each of these segments roll by.

Two flaws in the framework can be found but I would have to say they are common for more than just this Shaw Brother’s movie. As good as the set design is, the village sets do not look like very convincing outdoor locations. Clearly filmed indoors. Second, the different quick zooms (a favourite of Chang Cheh’s) can be jarring, especially in the beginning stages of the film and the different dolly in on actors aren’t always smoothly performed. I don’t believe dolly tracks were extensively used back then, if ever, and you didn’t have video playback either or the time to go back and rectify a mistake like that.

Each actor, when appearing on screen, makes an immediate lasting impression of their respective performances. We first see David Chiang, very determined and confident looking. That applies both to the character and David’s acting. He’s a character that goes from having humble goals to having to step up as a man and think through where his loyalty lies, the thinking character if you will.  Chen Kuan Tai is seen from the beginning as the rougher beast of the three. Ignorant even and someone that easily lets go of responsibilities in favour of women. Both men’s performances very suiting for the story and that’s a great, big compliment to give. Leading lady Cheng Lee, playing Chen Kuan Tai’s characters wife, gradually becomes very much an integral part of the character drama. She is a woman left in the background storywise but certainly not as an actress. Ti Lung showcases early skilful character acting which earned him the Taiwan Golden Horse Award for Outstanding Performance. Never is there any doubt in the viewers mind of Ma’s determination. A determination that becomes less about loyalty and more about winning the battles for your people. Those two can’t exist side by side at this time in Chinese history or in Ma’s mind.

‘The Blood Brothers’ was not a disappointment in any way and this classic Chang Cheh tale of loyalty, love and revenge is an consistently engaging martial arts drama. Shaw Brother’s productions rarely fails to impress and this is a terrific example of all elements blended together into great Hong Kong cinema.

Follow me
Kenneth Brorsson
Podcaster and writer. Find more of my work at SoGoodReviews.com.

Follow me
Latest posts by Kenneth Brorsson (see all)