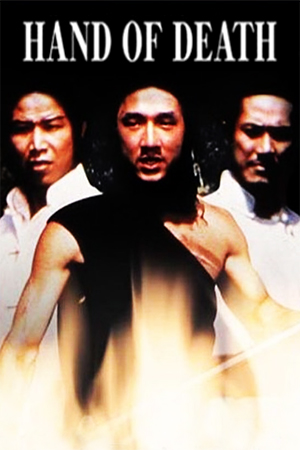 It’s very easy for most new converts to John Woo’s films to forget his earlier classics like ‘A Better Tomorrow’ and ‘Once A Thief’. Surprisingly though, some seasoned Woo fans forget his pre-‘A Better Tomorrow’ work or very often belittle its significance. ‘Hand Of Death’ deserves to be seen however, and it also marks an interesting moment in the career of one Jackie Chan.

The oft-seen storyline will no doubt be very familiar to devotees of the genre. The film begins with the destruction of the Shaolin temple by former pupil Shih who has turned to helping the Manchus. After this cataclysmic event, the surviving abbots send out the best pupil Yun (Tan Tao Liang) to bring this heinous villain down. In the dangerous outside world, Yun learns of the fear that Shih has struck into the hearts of everyone and begins to plot to bring down his enemy. On his way he meets a wood-collector (Chan) who seems to be friendly to the Shaolin cause, but unwilling to get involved. This soon changes when Yun’s plan to get into the domain of Shih backfires and he is captured, then tortured for information on the pro-Shaolin movement. The wood-collector shows his true colours and manages to free Yun, taking him back to his distant retreat. There Yun returns to health and learns more about his new friend. Knowing that their numbers are few in comparison to Shih’s army, the pair call on the services of mysterious swordsman Zorro (Wai) who has his own score to settle. Increasing this bands number are a few other fighters and their Shaolin contact who has details of the resistance movement. Now the brotherhood not only have to make sure that their contact reaches his destination, but also that Shih can finally be beaten.

Woo takes the aforementioned narrative – one seen many times before – and infuses it with a measure of depth that lifts this above the norm. Taking a leaf out of his mentor Chang Cheh’s book, Woo fleshes out each of the assorted heroes and gives them all a certain motivation. Added to this is the sense of brotherhood and unity that Cheh also championed; the heroic band become a sympathetic and closely bonded unit for us to identify with. Performances are all of a good standard with a very young Jackie Chan and Yeung Wai gaining the acting honours and James Tien making sure Shih is suitably menacing. With this is the superb choreography courtesy of the one and only Sammo Hung. The many fights give each of the talented cast members a chance to shine with superkicker Tan Tao Liang in particular showing off some very impressive moves. Tan’s final encounters with Sammo Hung, James Tien and others gives him every opportunity to dip into his huge repertoire of kicks. By the end of this well-crafted John Woo production, even the most ardent kung-fu film fan should be satisfied. Although not a masterpiece, ‘Hand Of Death’ is a good example of how quality quickly shines through and stands out in a crowded genre.