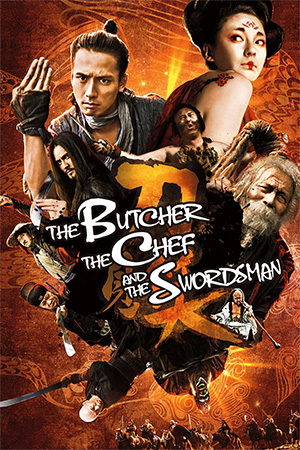 Ridiculed country butcher Shao dreams of courtesan Madam Mei yet knows an ugly nobody has little chance with a renowned beauty. Putting logic to one side briefly though, Shao enters the bordello where Mei resides only to be unceremoniously bounced out again by terrifying gangster Big Beard. The distraught butcher decides to kill himself, but a strange coincidence preserves his life while also bringing him into contact with a fabled weapon that has a sad story of its own.

In recent years, Mainland Chinese cinema has oscillated between intensely sober historical dramas and inane local comedies, occasionally combining the two in the shape of a parody. This increasing slew of mediocrity does not elicit a great deal of optimism for any new release and when ‘The Butcher, the Chef & the Swordsman’ starts, there’s little reason to think things will be changing before the duration is out. Full of quick-cut, millisecond shots, noise and empty fury, the first ten minutes gives a horrible shudder of deja-vu. And then something happens…

MV director Wuershan turns his big screen debut into one of the most striking rookie efforts in years. With all the flair of a young DePalma, this young film-maker sucks us into a world of nutty grotesqueries and keeps us permanently off-balance by Babushka doll storyline construction. A familiar story is rejuvenated with each new plot strand, each stylistic twist that Wuershan excitedly utilises. Juxtaposed with the technical flair is the creation of a world that is sodden, earthy and full of ugly detail.

Admittedly, ‘The Butcher, the Chef & the Swordsman’ falls foul of inexperienced self-indulgence at either end of its duration. The start almost derails the upcoming exuberance, but the final needlessly bloated fifteen minutes at least has the goodwill generated by the previous hour to fall back on. Nevertheless, as a debut feature these ostentations are to be expected though future efforts should be wary of falling foul of pointless sophistry.

‘The Butcher, the Chef & the Swordsman’ may be an uneven yoking of brilliance and banality, but it is so heavily stacked in favour of the former that this still proves to be a film of great interest. Wuershan is a director who may not be able to single-handedly redeem China’s parlous cinematic offerings of late, yet gives great cause for nascent hope.