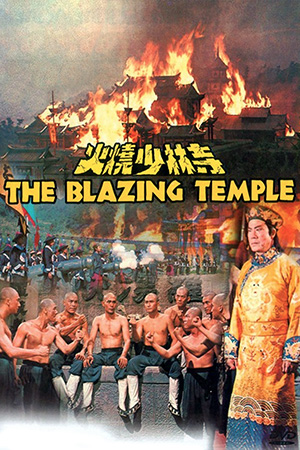 Although his name has never been said with the kind of reverence reserved for Liu Chia Liang, King Hu and Chang Cheh, Joseph Kuo deserves an honourable mention in the annuls of kung-fu cinema. Perhaps his films haven’t always had the polish or substance of the aforementioned auteurs, but he’s certainly been responsible for some genre classics. Fans of independent martial arts cinema will doubtless know his many significant efforts, including ‘Mystery Of Chess Boxing’, ‘Seven Grandmasters’ and ‘Eagle’s Claw’ to name but a few. With such a pedigree it was therefore obvious that Kuo would also have utilised one of the genres constant themes: the destruction of the Shaolin temple and the eventual fightback by the fighting monks.

‘The Blazing Temple’ opens with the emperor being informed of supposed events within Shaolin. According to his source, the religious order is training anti-Manchu forces to overthrow the unpopular monarchy. With this in mind he plots a vicious attack on the temple and the elimination of all of the monks therein. Within Shaolin the assembled order are unaware of what awaits them and concentrate on their training to pass the test of the Bronzemen. In fearsome manner the Manchu forces attack the temple and bombard it with constant cannon fire. Most of the monks are killed in the relentless attack, but a band of them manage to escape via a forgotten tunnel out of the grounds. Now the survivors must plan their revenge and their proposed assassination of the ruthless emperor. However this is brought into question when they find themselves hunted by their enemies and must also face the prospect of having a traitor in their ranks.

There’s much to enjoy in this entertaining kung-fu drama, though it can hardly be ranked among the director’s best. It is certainly absorbing to see a narrative that takes in the actual destruction of the temple rather than use it as the catalyst for the rest of the storyline. The lengthy middle section that actually features this is in fact the production’s major strength as Kuo manages to make a modest budget look impressive. ‘The Blazing Temple’ also features a number of kung-fu cinema’s bit-part players giving good performances, namely Kam Kong and Chan Siu Pang. Working against these virtues is a few factors which mean that this is good rather than above average. Importantly the choreography is not too impressive, especially when one looks at some of the films that came out in the same year. The fight scenes, with the exception of the excellent finale, tend to concentrate too much on gimmicky jumping and flipping rather than the actual skill of the protagonist. Another thing that quickly comes across is that the Shaolin monks – who are the heroes of the piece – are not averse to some harsh actions themselves. Instead of simply leaving the temple when the bombardment begins, the students still have to overcome a final test with the threat of death looming should they fail. Overall then ‘The Blazing Temple’ is not Joseph Kuo’s best nor is it near his very pinnacle. It does, though, offer some solid enjoyment for patient viewers.